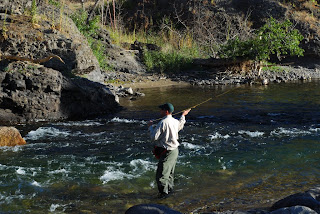 Last Friday advertising director Will Jordan and I left Billings early to head up the Stillwater River for a pre-noon fishing trip. Although we each landed a few mid-sizers, the most intriguing fish were the ones who wouldn’t play the game with us.
A small, almost unnoticeable riffle ran through a deep, big area of calm water and on the far edge of that riffle were the constant pops of fish rising to the surface. To cast straight out to them required a little more line in the back-cast than the trees and bushes would allow (in fact Will found evidence of other fishermen in those very bushes) and the pool forms right off the shore so wading out closer is not an option.
Letting the fly drift down to them isn’t much of an option either since the area above the pool is fast, deep, and not very accurately described as "still water". Casting from below the pool wouldn’t provide any better chances as the inability to mend the line properly or get the right drift would ruin any chance of fish. And no way could a fisherman get enough leaverage to utilize the roll cast.
I finally made my way out to a rock, cast upstream and whipped the rod slightly to the side just before the fly touched water in an effort to basically mend the line in the air. The drift was then good and the fly could hit the areas I wanted.
Still, that deep, slow pool gave any fish in there plenty of time to look at my fly, the knot, the line, and perhaps even discuss it with the other fish before deciding to go after it. I had one raise as a result of all that figuring, though that's one more than I had with any other method.
There are reasons why fish get so big—they manage to avoid getting caught and the beasts in that pool certainly have seen their share of enticements.
In my mind, I taught myself a new trick to fishing a difficult piece of water like that. It didn’t pay off on this trip, but I’ll save it for another day when the opportunity arises.
Posted by Greg at 8:33 AM