Jokes about Al Gore, Mother Nature and snow tires are running rampant right now in Montana.  When in doubt, it is always easy to chat with your neighbor about weather, but currently most have tired of that too. It is nearly as fun to discuss tax day.
While March began to transition nicely, April has been a setback to progress so far.  Some reservoirs were nearly ice-free, but began to refreeze the past week. Geese that have flown north have been met with snow and ice.  Spring bear season has opened, as well as turkey season, but so far, both hunters and game have been confused on how they should be acting.  I have my ice-fishing gear, cohabiting with my boat and fly rod currently.
But, spring will happen, and eventually summer. With the exception of perhaps upland birds who are vulnerable to spring blizzards, an extended winter, with additional snow and rain is probably a blessing.  The snowpack in the mountains is still virtually at mid-winter levels.  This moisture should keep stream flows at trout-friendly levels longer this summer.  Reservoirs will be filled more than expected after they took a modest drop in 2012.  Fire danger will still be an issue come August, but it too should be more manageable with the much-discussed, often-cussed, sixth month of winter.

Did you get your taxes in? 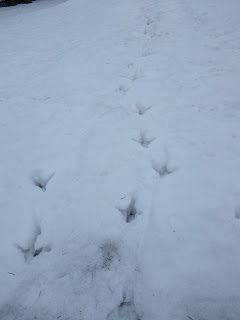