It's June 24th, and most of Montana's freestone rivers are still far from fishable. In fact many rivers recorded their highest flows of the year last night!

This is a year with the potential to set records, both in terms of maximum discharge and late dates for peak flow.

A couple of untamed rivers in southwest Montana are perfect examples: the Yellowstone and the Gallatin. The Yellowstone near Livingston went over 30,000 cfs last night and is still climbing. The river hasn't recorded flows that high since 1997 when it measured 38,000 cfs on June 6th - a peak flow nearly three weeks earlier than what the river is experiencing this year... assuming today's flows are the peak. The Gallatin River near Gateway touched 7,000 cfs last night, it hasn't seen those levels since - you guessed it - 1997 when it hit 9,160 cfs on June 2nd. Those high flow events in 1997 were the highest measured discharge (at said location) on record for each river.

Only once in over 100 years of recorded data has the Gallatin River peaked as late as July - an event that occurred on July 4, 1975. Similarly the Yellowstone River's latest recorded date for peak flow came on July 6, 1975. The calendar is creeping toward those dates and considering the abundant snowpack remaining at high elevations, some of Montana's rivers could come awfully close to setting 100 year records for the latest date of peak flow.

This late runoff is a frustrating prospect for anglers, but with the bigger picture in mind these extended flushing flows are great for the fisheries. For those who just have to fish, most of the tailwater rivers (ie: Bighorn, Missouri, Beaverhead, etc.) are fishing pretty well. The Big Hole is dropping and clearing just in time for the salmon fly hatch. Countless headwater streams are an option, as are numerous spring creeks and a myriad of mid- to high-elevation lakes.
Posted by Will Jordan at 8:02 AM 2 comments: 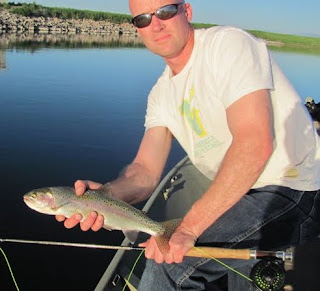 Traditionally on Father's Day, my Dad and I make plans to go fishing somewhere locally. Often it is fishing walleyes, occasionally trout fishing. The routine is only fitting since he introduced me to the sport many years ago.
Once again, the Dismal Spring of 2011, hampered any plans to recreate this past Sunday. In fact, my boat hadn't moved from its parking spot since last fall, when it was officially cast aside for hunting season.
Since the weather finally perked up today, very fitting on this first day of summer, Dad and I hooked up the Lund and headed to a local reservoir after work. There aren't many options of any kind right now, as the streams are still raging mad from snow melt and consistent rains.
In my haste to leave town at 5PM sharp, I neglected to grab my fly rod. While I had spinning gear in the boat-an assortment of mostly warmwater gear for fish that don't rise to tiny insects-I wasn't too pleased with myself.
For what ever reason, maybe out of sympathy, Dad wasn't using his fly rod, instead throwing a variety of small spinners toward shore. Well, someone might as well put the 5-weight to work, so I helped myself. Eventually, we found some fish, near the face of the dam that were occasionally rising. There wasn't a lot of surface action, but it helped our morale, just seeing some rainbows near the boat. With the help of a small indicator, I moved a couple of fish that liked my beadhead prince.
It was finally the summer evening that we had been waiting a long time for. A fitting end to a Father's Day that came a couple of days late.
Thanks for sharing it Dad. The sport, the day and the fly rod.
Posted by Jay at 9:05 PM No comments: