2012 GOAT LICENSE (313-00)
SUCCESSFUL
District 313-00 was your 1st choice for the ‘2012 Goat License’ Drawing.
I called Dad last night at about 10PM, which is a pretty dark hour in his house.  I had just checked my goat and sheep applications on the FWP website, UNSUCCESSFUL.  I then checked Dad's, Winner, Winner. He had drawn a coveted mountain goat permit in the same area that I had killed a Billy years earlier.

In 2000, I was lucky enough to draw a goat tag in the Crazies, the first year that I had applied.  It was a great hunt, a rewarding hunt and a tiring one. In fact, I recall Dad saying afterward, "I probably won't be able to hunt up there when I do finally draw a goat tag." Well, the time has come and knowing Dad and his above-average fitness for his age, he will be fine.

Since Dad was with me every step of the way in 2000, helping me get the animal down in one grueling trek downhill, it is only fitting that I return the favor this September.  His good deed then, has earned him his goat tag and my company. 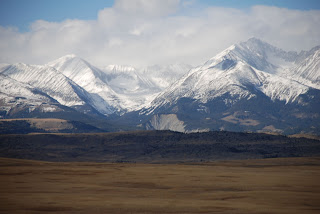 It started this weekend in typical June fashion; Fort Peck Reservoir was offering up walleyes, teethy northern pike, scrappy bass, and large catfish. How does one decide? Matt and I tried to do it all, catching seven species, which included perch, crappies and drum. It was a nice mixed bag, with fish caught on both fly and spinning gear. Some were released to fight another day and a few came home with us. Meanwhile, freestone rivers are starting to lose their milky appearance and Montana's tailwaters are continuing to fish well. It is shaping up to be a great season on the state's best-known, and little-known, fisheries. So, begins the balancing act of making time for all of the various opportunities across the state, along with, unfortunately, work. All you can do is fish when you can. Yard work can wait. 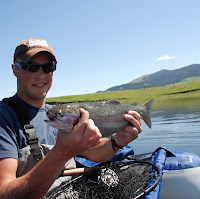