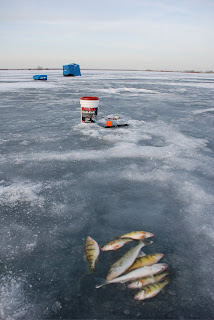 Most folks living in Missoula or Billings would assume the entire Great Plains would be ice and snow free, since their balmy weather has greened up the grass and muddied up the rivers the past few weeks. But, on Montana's northern-most reservoirs, there was still enough ice recently to partake in a final ice fishing outing.
I typically enjoy "late" ice better than those days in December, when a lot of anglers are excited to try their new gear or are perhaps just bored with sitting inside. I am typically still running the dogs on wary birds and can't make time for fishing. But, in late March, I enjoy curing cabin fever by sitting in a lawn chair, jigging for perch and walleye. The days are longer, the sun brighter and the fish often are cooperative.
This final trip was hot and cold; the perch bite was slow throughout the day, but the walleyes turned on very nicely during the fade to dusk. We caught only the smaller-sized male 'eyes, which was fine with us. They are better eating than the larger females, females that have important business to tend to in the next month or so.
Upon arrival at home, my gear went directly into storage. Now I am truly ready to trade the auger for a boat, warm boots for flip-flops.
Posted by Jay at 6:03 PM No comments:

Sometimes It All Comes Together 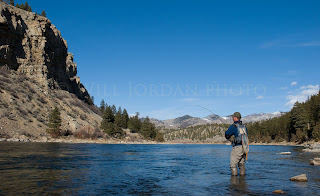 Some people seem to have luck on their side when it comes to fishing. My friend Matt is one such person. Now that's not to say that he isn't a skilled angler, for he is, but he just seems to have a little extra river karma going for him. He's caught some very nice fish in my presence over the past year, none more so than the rainbow he landed on the Missouri River last week.

Unfortunately we didn't have a tape measure along, but there is no doubt that it was somewhere in the 23-25" range. As impressive as its length was, the girth of this fish is what really set it apart, it was massive! 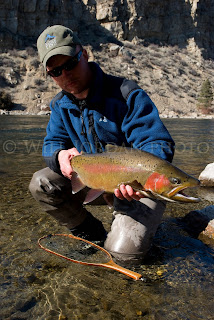 In other news, I fished Big Spring Creek on Thursday afternoon following a morning business meeting in Lewistown. While the creek looked great to me, the locals were complaining about it being off color from low elevation snow melt. There was 3-4' of visibility, which turned out to be plenty. I fished above town and caught good numbers of rainbows, and an occasional brown, up to 14". Most fish were taken on a shop vac/pheasant tail variation, but a couple fell for a small partridge and pink soft hackle. I also saw my first blue winged olives of the year...there weren't many and the trout weren't really looking for them, but it was great to see - spring is definitely in the air.

The weekend found me in Kalispell for the Great Rockies Show and although I brought my fishing gear, it wasn't until the drive home on Sunday afternoon that I had a chance to fish. The young lady that accompanied me - and who was essentially my guide for the afternoon - put me onto some great looking water along the upper Blackfoot. Karen was even gracious enough to leave her rod behind so that I could fish more, what more could a guy ask for? But it was to no avail, the water was cold and the fish were a bit lethargic. I did have one take in the last run we fished, but I must have been distracted...my hook set was poor and the trout slipped off. Even so, I can't remember a better couple of hours spent on the water in quite a while. It all came together on this day with beautiful weather and great company on the river.
Posted by Will Jordan at 10:22 AM 1 comment: