Spring walleye fishing can be fickle. The window of opportunity from ice-out through the spring spawn can open and close and open again in hours on Montana reservoirs. When water temperatures creep into the mid-forties, walleyes begin their quest to reproduce and point their noses up rivers and creeks. Anglers also become anxious this time of year, looking forward to that first boat ride of the year and with a little luck, the first 'eye of the season.
The first open-water adventure of 2012 was a complete bust. Dad and I never caught a fish in 7 hours of fishing. The Mighty Mo' was running muddy and cold. I had envisioned having the market corned on large, spawning walleyes, but came home with my tail between my legs.
This past weekend, things had changed. The water was clearer and slightly warmer. Good numbers of walleyes were in shallow water, two to 12 feet deep. Our presentation was simple, just pitching jigs and minnow toward shore, keeping the boat just out of the heavier current.
While the majority of the fish were males, we did catch a few larger females that were pushing 25". We practiced a somewhat-selective harvest, keeping mostly smaller males, but a few females around three pounds also became a very appreciated, new culinary success back home. Walleye season is officially underway.
Posted by Jay at 8:49 PM No comments: 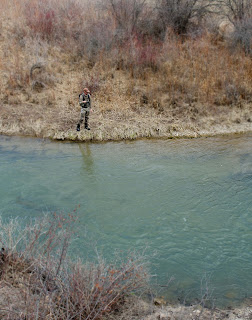 You would think that current fishing reports pertaining to Big Spring Creek would be a staple of this blog, yet such reports are suspiciously scarce. Montana Sporting Journal editor Jay Hanson resides in Lewistown, within walking distance of the creek. His lack of reporting signals to me that he's either taking this great fishery for granted, or that he's trying to keep it quiet. I suspect it's a little of both.

The only reason that you're reading a report about the creek is because I traveled to Lewistown this weekend to meet with Jay. It was the second leg of an ambitious road trip combining business and fishing (read the full report here).

After wrapping up our meeting Jay guided me to one of his honey holes upstream from town. Upon arrival I was surprised to find the creek running a bit high and off color, the result of low-elevation snowmelt during this unseasonably warm spring. Even so, the spring creek was in much better shape than many of the regional freestones, some of which were too turbid for productive fishing over the weekend. From Brewery Flats upstream, the creek had two to three feet of visibility - clearer up near the hatchery, and dirtier further downstream. 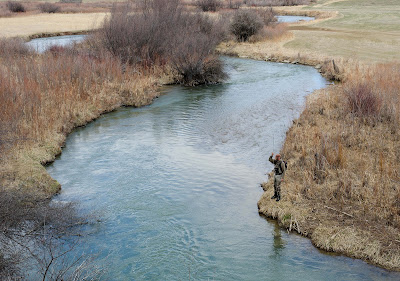 Each of my first two drifts through one of Jay's favorite runs resulted in trout, both took a size-16 pink soft hackle fished deep under an indicator. Over the ensuing couple of hours I worked my way upstream, picking up a trout or two in most of the larger pools and runs that I came to. The aforementioned fly, along with a San Juan worm, accounted for most of these fish. I also spent some time methodically working a streamer along banks with structure. A black sex dungeon affixed to a heavy sink-tip line lured two nice browns, one that I landed, and another that charged out from a rock, but wouldn't commit.

Good numbers of baetis were hatching from about 1pm-3pm, most of them were a size 18, with a few that were closer to 16. The dry-fly fishing was non-existent due to relentless high winds all afternoon. Anglers who find themselves on the creek over the next couple of weeks on warm, overcast afternoons with calm winds should come prepared for baetis hatches and rising fish.

Who knows, perhaps Jay will surprise us all and report on the productivity of a simple Adams (#18) and pheasant tail emerger (#18) combination (fished on 5x tippet with a long leader... hint, hint) in the coming weeks. If you make it up to Big Spring Creek yourself, be sure to drop him a line reporting on just how good the fishing was out his back door.
--
Look for a feature on central MT trout water, including Big Spring Creek, in the next issue of Montana Sporting Journal.
Posted by Will Jordan at 7:06 PM 1 comment: