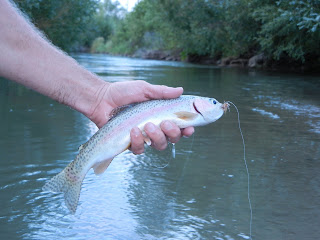 July 4th was my guess. Today is July 22nd. A couple of months ago, during "the flood", we all took bets on when our local creek would be clear enough to wet a line. This evening, there was finally enough clarity to commence the 2011 fly fishing season on Spring Creek. Was it crystal clear? No. Good enough to make you feel like you had a chance at a trout that hadn't seen anything man-made for 9 months? Yes.
It has been an amazing year in Montana. Fly shops were selling more coffee to locals than flies and t-shirts to clients. The major tailwaters, the only options for weeks, were beaten to a froth with fly casters, but still awfully productive. This week we finally heard of some near normal conditions on the Big Hole, Upper Madison and other rivers. A lot of time has been lost this year. Bitterroot Skawla frenzy? Brief. Mother's Day Caddis hatch on the Upper Yellowstone? Skipped. Hoppers on the lower Yellowstone? Let's hope so. That big girl is still running high.
My fishing tonight was decent. Not a banner evening, but not too bad. The grass along the banks was waist high, the mosquitoes were running eight or so to the pound. These are the results of a wet spring. When the creek was sprawled out this spring, covering acres of ground and flooding basements, I couldn't help but wonder about the trout. Are they eating more? Are they not feeding at all, just dodging sticks and garbage, sitting on the bottom? Well, they are still there, acting like trout, fighting like trout and occasionally frustrating me like trout. Regardless, it is nice to have our old friend back.
For those of you that have been emailing, wondering if it was worth a drive up here to fish and buy me supper (Will, Spartas, Bryan Attwell, et al), come on up. It is time.
Posted by Jay at 6:59 PM 1 comment:

Friends, Fishing and the Fourth 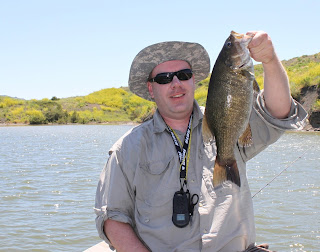 Typically in late June, early July, I am usually still chasing walleyes on Montana reservoirs, but this summer, with the lack of fishable trout water, makes it nearly a necessity. Granted, the boat ramp was completely under water and part of the campground was also damp, but our Fourth of July plan sounded like a good one.
While I expected a good walleye bite, I didn't expect to see eight species that were all on the feed this holiday weekend. Between the four of us, we netted walleye, northern pike, smallmouth bass, crappie, perch, sauger, and the less desirable, drum and goldeye. We each had our personal glory over the course of three days. Mike landed his biggest walleye to date, a feisty five pound fish that came out of six feet of water. Scott pulled in a smallmouth that topped four pounds. Laura finessed the most walleyes, some of which provided a nice fish fry Saturday night. And I led the group in song and played my guitar as we enjoyed the fire. Actually, we just enjoyed the fire.
Once again, I made the drive home, reflecting on how fortunate I was to live in this great state. The fishing pressure was light, despite it occurring during a busy weekend, the weather was spectacular and the fish, a true smorgasbord of riches, cooperated. What a great Fourth of July, what a great country and what a great state.
PS. Don't judge Scott by his hat. He is actually fairly sophisticated and worldly, but after two days of sun, he was desperate for shade.
Posted by Jay at 9:09 PM 2 comments: