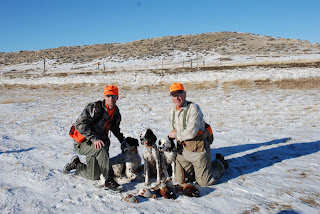 Staying at home in Montana over the Christmas holiday has its advantages. I am always well-fed and if the weather is not too frightful, bird season is still open.
Christmas day was just what I had asked from Santa: hunting with Dad and our dogs with December weather that was nearing 20 degrees and no wind.
Never mind that the snow had a icy crust on it, allowing the roosters to run a football field's length ahead of the dogs. The Huns, they were jumpy after a season of being bothered by man and companion, with a dozen or so sets of eyes to stand guard in each covey.
But, like anything, if you work hard enough, eventually a pheasant holds tight and Huns sit long enough for the dogs and the hunters to get into position.
In late December, you don't expect to shoot limits nor do you need to. You are walking the big spaces of Montana with cold hands and chapped faces, knowing that it is a long wait until next September. A day in the field in December is simply a great Christmas gift.
Posted by Jay at 7:49 PM 1 comment:

Don't Believe What I Write 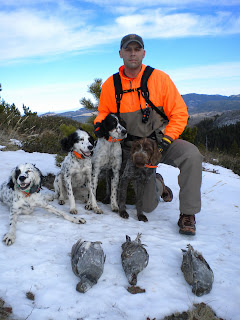 More than once, both in print and in conversation, I have stated how any avid blue grouse hunter, best be in the mountains in September. The rationale is two-fold; it is usually too hot to hunt down low in early September and by mid-October, the snow makes hunting blues impractical at the higher elevations.
However, I was recently persuaded into giving it a shot and it turns out I was wrong.
Good friend Ryan Young was in my neck of the woods and had never shot a blue grouse, despite being a bird hunting fool of late. He was determined to give it a go, but I made him no promises. I warned him that blues are just as likely to spend their winter months perched in trees instead of wandering on the ground, so the attempt could simply be a walk with guns, uphill and through deep snow.
Once again, I was wrong. The snow wasn't deep enough to be a factor. And since we waited until mid-morning before making our ascent, the birds were on the ground, enjoying the warm morning sun. The dogs did their part, and we made out shots count. Ryan, who has spent his whole life in eastern MT, was in heaven. I wouldn't want to open an outfitting business guiding folks to blue grouse in November and December, but for now, I was glad to be wrong.

A Good Boot, Made Better

After having owned both the Danner Sharptail and now the Sharptail II, I can say that the improvement on the latter was significant. As promised in the Sept/Oct issue of Montana Sporting Journal, here is a follow-up on the durability of the Danner boot after a season(40 days) of hunting in the boot:
While the boot does indicate some normal wear, it definitely is still fit enough to hunt in and will carry me into next season. The Sharptail II endured the Minnesota north woods swamps, cactus and sage of eastern Montana and many miles of looking for the big bull during elk season. In the past, a season of many hard miles hunting birds in tall grass and thick brush, would nearly make my hunting boots "one and done". It will be nice having a proven boot ready to roll into 2010.
Posted by Jay at 6:14 PM No comments: