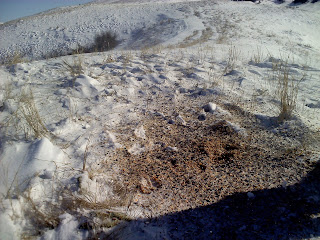 After record low temperatures last week and officially having snow cover in Central Montana for the 4th full month, I couldn't take it any longer. I had to check on the local partridge covey. They aren't birds I hunt, but birds that my dogs get to find, point, and sometimes chase, throughout the spring, summer and fall. Huns are often predictable in their favorite haunts and they were here again, midday on a windy, wintry day.
Unfortunately, the covey of 11 Huns in November, numbered only 7 this day in February. Different covey? Possibly, but doubtful. They flushed to their usual refuge, a patch of buck brush, just over the ridge. They sounded the same, flew the same, but I felt sorry for them. When the landscape is nothing but white, crusted snow, I really wonder what they eat. I feel less sorry for pheasants, as they are bigger, can eat foods such as Russian olives and can scratch through some snow. Sharptail and sage grouse, I don't worry much about, as they are more native than we are.
Folks like myself that hunt, often tout that the hatch is more important than winter mortality numbers. Sure, the hatch can make or break a hunting season. However, if the birds are dead in a March blizzard, their nests in May don't exist.
So, I completed the mission on this long, lunch-break from work. I carried the Home Covey a bag of food and spread it on the only bare knob on which they like to sit and scratch grit from. It may be without benefit, it probably wouldn't sit will with Montana Fish and Game. Feeding wildlife is frowned upon, but I had to do something. Let's hope there are 7 Huns remaining when this long winter finally comes to an end.
Posted by Jay at 9:28 PM 1 comment:

Not Done With Winter Yet 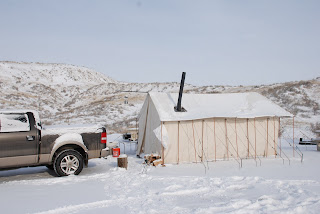 After having a number of schedule conflicts in January, my ice-fishing jaunts were severely in jeopardy of being cancelled until next winter. Work, combined with a week of temps in the 50s and early runoff entering some of the rivers, made me look toward spending time in the boat, not sitting in an ice shanty.
Hold the phone. With one simple Alberta Clipper, Montana had another visit from ol' man winter, and I was packing up ice fishing rods, fish houses, heaters and plenty of warm clothing. 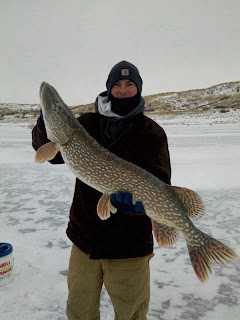 Arriving at the lake, I was surprised that it was deserted. Then again, with the combination of earlier reports of ice deterioration and now with expected high temperatures in single digits, there were a number of reasons why people wouldn't risk a trip to the outback of Montana.
As typical of post cold-front fishing, the walleyes were a bit sluggish. Most of the 1-2 pound "eaters", were caught in the twilight hours. Northern pike were active during the day, giving us problems trying to land the toothy, aggressive fish on lighter walleye and perch tackle. We did get a few of them up onto the ice, Andy bringing in one around 18lbs, that he released.
But, as is usually the case, the fishing trip was only partly about the fishing. Scott treated us to a meal of elk burgers Saturday night, mule deer surrounded us the entire weekend, with coyotes howling in every direction. And when my diesel truck wouldn't start Sunday morning at 15 degrees below, I was quickly reminded that we have plenty of winter remaining. Maybe too much.
Posted by Jay at 7:50 PM 1 comment:

Montana's stream access law is under siege by HB 309. With its supposed intention of "Clarifying the prohibition of recreational use of water diverted from a natural water body...", HB 309 seems innocent enough, but a closer inspection of the bill's language reveals its inherent evil.

The bill was introduced by Jeffrey Wellburn (R-Dillon) and was supported by an alarming number of our elected officials as the bill made its way through the House of Representatives this week.

The analysis' of HB 309 from trustworthy organizations that have our interests at heart: Montana Trout Unlimited (TU) and Fishing Outfitters Assoc. of MT (FOAM) reveal that the bill is a serious threat to the status quo of stream access in Montana. You can read a thorough dissection of the bill on the websites of those organizations, but the gist of it is that the bill aims to do more than simply clarify the law as it pertains to irrigation ditches. Rather, the bill would broadly define an irrigation ditch as, "Any waterway created at least in part by waters diverted from a natural water body where the diverted water is the principal source of water in the water body."

There's a lot of gray area in that type of language, it could be interpreted in a number of ways. In a worst case scenario the bill's passing would prohibit public fishing on a lengthy list of the state's best water - from small streams to mainstem rivers.

There are scores of water bodies throughout the state that suffer from low flows during late summer. This situation is exacerbated by - and in some cases rooted in - irrigation out flows. I'll never forget one August day a few years ago when I stopped at Selkirk FAS on the Musselshell - the river was a collection of pools connected by a mere trickle; yet the irrigation ditch paralleling the river was plum full. That is an extreme example, but it's certainly possible that - during periods of low flow - the primary source of in-stream flows on numerous waterways is the return flow from irrigation ditches. HB 309 would define a free flowing river or stream as a "ditch" in such instances.

Looking at the bill from a pragmatic and simple minded angler's perspective, it's completely unnecessary. Assuming that the bill's true intention is to clarify the prohibition of recreation on irrigation ditches, the current stream access law already has that covered. And what's more, who wants to fish a ditch anyway? I can't imagine it really being an issue for landowners.

The bill - and our collective fate - now rests in the hands of the state senate. Whether you live in Montana or not, contact your senator... any MT senator... a republican senator. Should the bill pass the senate, our last line of defense against HB 309 lies in a veto from Governor Brian Schweitzer, but let's not allow it to get that far.

If you don't think this is a big deal, think again - and if you need a second opinion just ask any Utah angler.
Posted by Will Jordan at 9:34 AM 1 comment: