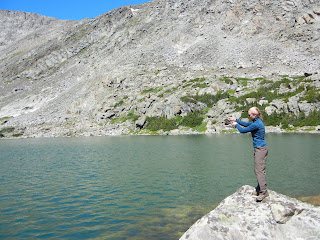 If you read Montana Sporting Journal, you know that we often tout Montana's great mountain lake fishing. The season is very short, the list of potential lakes to fish, so lengthy. While I am one the folks bragging up these little-fished resources, I hadn't yet been up in the mountains this summer to hike and fish.
That finally changed this weekend. Laura and I didn't have much time, just two days and one night to work with. Regardless, it was ample time to grab a pack, lightweight camping gear, and just the essentials out of my fly vest and head for the hills.
Upon arrival, the trailhead near Red Lodge was bustling with activity, which is always unexpected. Vehicles from five states, horse trailers and a couple of large vans, probably hauling groups of people were all present. However, there is no need to fret, as it is never crowded once you are a few miles into to bush. In fact, 1/3 of the people were within the first three miles of the trailhead and the horse trailers were for hauling mules to work on rebuilding parts of the trail.
The most difficult decision was to decide which lake to fish. Laura and I had six lakes to choose from, all around 10,000 feet, some of which held cutthroat, the others had brookies. We picked a lake that held both, but lacked a well-marked trail from the "base camp". The extra work would pay off, as we had the lake and its afterpool to ourselves. The fish were smaller than I had hoped, but with many of these mountain lakes, it is all about the timing of the stocking and growth rates. Two years from now, the fish in this alpine gem will be beauties.
We fished until mid-afternoon, packed three gutted trout into a Nalgene bottle packed with snow, and headed back downhill.
Once again, the time in the mountains was rejuvenating. It is always remarkable how you can be at snow level at noon and be back in Billings a few hours later where the temperature is pushing 90 degrees (Friday night in camp, water in the dog dish froze). The scenery never gets old and with a little bit of effort, you are rewarded with a little bit of heaven.
Posted by Jay at 8:32 AM 1 comment: