A Day on the Yellowstone 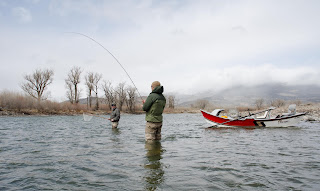 After working all weekend I decided that I needed a day off on Monday. It just so happened that a couple of my fishing buddies also had Monday off, and so plans were made to float the Yellowstone River near Livingston, from Pine Creek to Carters. The forecast was favorable, in the sense that they (NOAA) were calling for relatively calm wind out of the SW, to go along with a strong chance of precipitation.

The river had been warming into the upper 40's consistently every afternoon, and reports of good streamer fishing sounded promising. We launched at Pine Creek Bridge late in the morning under overcast skies. Right out of the gate our double nymph rigs were working well - although much of the catch consisted of whitefish. We caught trout on a variety of patterns, including stonefly nymphs (girdle bugs, etc.) and smaller trailers such as soft hackle pheasant tails, SJ worms, and caddis larva (green rock worm, etc.)

We stopped to wade fish at a location where the river split into multiple channels, and it was here that we felt the first powerful wind gusts blast us from the north. A couple of eddies along the channels produced numerous fish, many of which were rainbows that aggressively chased a streamer. 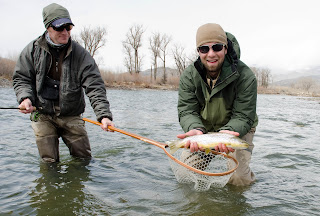 We continued our float downriver, stopping at a few likely looking runs where we caught some sizable browns and rainbows on the soft inside corners of riffles - and in the riffles themselves. But the weather was becoming a concern. The wind was blowing hard out of the north, posing less of a problem for fishing than for rowing - a brutal headwind isn't much fun in an oar powered boat. Despite the wind, the fishing remained good - although we had to push through lots of great looking water in order to get off the river by dark. Baetis hatched throughout the afternoon, and a few March browns were spotted.

The Yellowstone still has a brief window of opportunity for good fishing over the next couple of weeks. It was already a bit off color, particularly below town. The nymph and streamer fishing should remain very good until runoff hits - and with any luck we'll see the caddis hatch while conditions are still favorable.
Posted by Will Jordan at 10:20 AM No comments: 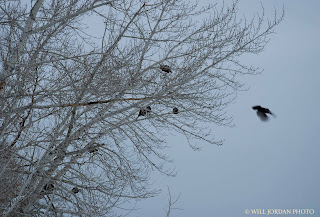 Spring turkey season opens tomorrow, 4/9, in Montana. Old man winter is back for an encore - a couple of inches of fresh snow fell overnight in the Gallatin Valley. If the winter conditions persist into tomorrow, it should make for a productive morning of turkey hunting.

The gobblers are responding to calling, and the cold conditions are keeping them in their tree top roosts late into the morning. I watched a sizable flock this morning from first light until about 7:30am - the majority of the birds didn't hit the ground until well after 7:00am - a full half hour later than usual.

For those getting out tomorrow: best of luck and enjoy the time afield.
Posted by Will Jordan at 8:08 AM No comments: