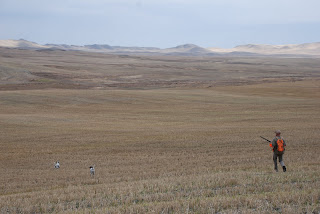 It happened to my Dad quite a few years ago, in the north woods of Minnesota. Dale Spartas, fantastic photog and well, decent friend, also speaks passionately about it happening to him. During my college years, it happened to me, before I even knew how serious it was. For sportsmen, it is one of the most despicable acts known. I don’t have a name for it, but simply, as Dale calls it, “Going Back.”
Going back is when you show a so-called friend, one of your hard-earned hunting or fishing honey holes and they make it their own. It can be an inconspicuous stretch of stream that holds larger-than-average trout. Maybe it is a hidden drainage that offers up more big bull elk than normal. For some reason , the classless act seems to torment bird hunters more than most. Maybe it is our need for elbow room, the onset of dwindling access or maybe we are just solitary folks. Regardless, many of us serious bird hunters are very careful who we hunt with. We will often hunt alone, before we hunt with some we don’t know or trust.
I won’t defend any guy that “goes back”, but for some, they are just ignorant. When it happened to my dad, the scofflaw had the gall to brag to my Dad about a recent hunt he just had in the very grouse and woodcock covert that was previously shown to him. I caught my college friend red-handed, just as he and his dad were returning to their truck, exiting the pheasant bonanza that I had driven him to the weekend before. Needless to say, I didn’t stop to chat.
Poaching another man's spot isn't always black and white. How about on private land, if the landowner says you are both invited back, when it was you that introduced the two? Can your buddy go back when he pleases or only with you? Same question applies to Block Management. It appears in a public pamphlet, but you did the groundwork to determine good from bad Block Management? Bottom line, if in doubt, don’t go back.
So, Dale, don’t you think after all of these years, we can finally hunt together in Montana? Let's hunt your Hun stuff first.....
Posted by Jay at 7:39 PM 2 comments:

It's the dead of winter here in Montana. Sporting opportunities are slim to none, unless you're into ice fishing or predator hunting. Most of us are in a state of semi-hibernation, spending long hours watching football, tying flies and reloading.

This weekend a local fly shop gave guys - and even a few gals - a good excuse to get out of the house for a couple of hours. Montana Troutfitters, a Bozeman fly shop, has recently started up their annual "weekends with the legends" series on Saturday's. To those of you who aren't into fly fishing, this may sound like a mundane outing. To those of us who are passionate about the sport of fly fishing and the art of fly tying, it was very interesting.

This weekend's presenter was Tim Tollett of Dillon, MT. Before listening to Tim speak I knew him as the owner and operator of Frontier Anglers, but to be completely honest I had no idea just how legendary he is in the world of fly fishing.

His knowledge seemed infinite, his story telling was top notch and his tying tutorials were educational. All in all it was a fairly humbling experience, making me realize just how much I still have to learn about fly fishing.

Those flashback nymphs that we've all relied upon at times over the years - yeah - Tim is responsible for bringing those onto the scene in the states. He told stories about fishing with the likes of Al Troth and Lee Wulff, famous anglers and innovators from a bygone era. He dispensed more knowledge in the two hours that I was in attendance than many anglers learn in a lifetime of fishing.

Check out the line-up of legends that will be presenting at Troutfitters over the next several weeks and make it to the shop if you can, there's a wealth of knowledge to be had.
Posted by Will Jordan at 9:14 AM No comments:

While drinking my coffee this morning I visited Dan "Rooster" Leavens blog, Rooster's Ramblings. Here I found a video trailer for an upcoming documentary about the Yellowstone wolf reintroduction's impact on wildlife and hunting in SW Montana. The name of the documentary is, "Yellowstone is Dead" - you can probably deduce the viewpoint of the film makers from that. The video includes an appearance by Don Laubach of ELK Inc. - living in Gardiner, MT Don has witnessed the downfall of the Northern Yellowstone Elk Herd over the past 15 years. The full length documentary promises to be interesting.