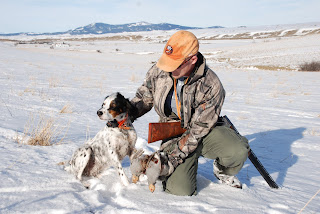 The Christmas and New Year's holidays are always bittersweet for us bird hunters. At the same time that we are celebrating with family, enjoying a few days off from work, we are also trying to fit in a final couple of days hunting. Often, these final days afield are cold and miserable, providing plenty of excuses to stay home, if needed.

My final hunt in 2010, was on Christmas Day, just a few miles from town. It wasn't meant to be an all day hunt, just a quick walk to exercise the dogs and give myself a bit of breathing room between excessive bouts of eating. In fact, I didn't don my usual hunting vest and just threw five shells in my pocket.

The morning was only offering temperatures in the single digits, but without any wind, it was a nice day to be following dogs, carrying a shotgun. As soon as we crossed the first wind-swept ridge, the dogs were rigid, both looking downhill and upwind. Just as I spotted a flock of sharptail on the ground, the birds took flight, giving me a long shot at one bird, but to no avail. A few minutes later, Abby was locked up again, this time with a covey of Huns in front of her. I managed to drop two of the birds, one of which was retrieved by Abby, the other one I picked up, after the fact.

I continued my walk, encountering more sharptail, but not needing to pull the trigger. I had all I needed in my brief walk: fresh air, good dog work and one day closer to the 2011 upland bird season.
Posted by Jay at 9:03 AM 1 comment: 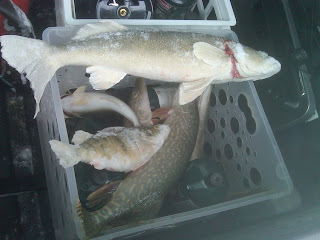 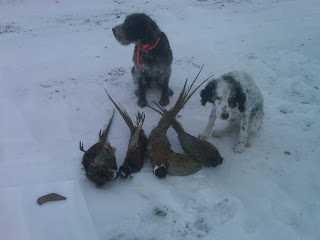 Lame title, I know, but Cast and Blast didn't fit since there isn't any casting involved with ice-fishing. There wasn't a lot of blasting either, but we did see plenty of birds.

Scott, Ryan and I met up in northern Montana, to do some early season, warm-water (species, definitely not the water) ice-fishing, combined with late season pheasant hunting. It was an "in-between" proposition, as there wasn't an abundance of ice, but almost too much snow for decent bird hunting.

We were able to get on the ice with a four-wheeler, a machine that is quite handy for towing the abundance of gear required for comfortable fishing when the temperatures are below zero. But, with only six to eight inches of ice, we weren't overly confident driving around soft spots or cracks that would heave when driven over. The fishing was decent; the pike and perch were almost a nuisance, although some of each made their way into the bucket, to be cleaned at home once they thawed. The walleyes were harder to come by, although Scott had a good flurry of action when Ryan and I were chasing birds.

Chasing we did. The birds that have survived the past two months of the upland season in Montana are wary ones. We had decent dog work with Ryan's Griffon and my two setters. It was mostly hens that sat tightly, but we did kill four roosters the first day. We had our best luck in heavy cattails, cattails that were misery to walk through after being socked full of knee-deep snow. The second morning we had a strong wind and a temperature at a nice, round number of zero. Needless to say, we couldn't put up with that more than a couple of hours. It was also tough to compete with the sanctuary of a nearby farm yard that was absolutely loaded with birds.

But, we had enough success to feel good about our winter cast and blast. Two days later, when the fish finally thawed and the roosters were cleaned, a meal of flaky, white fillets and tender pheasant breasts was enjoyed immensely.

(I apologize for the lack of good photos. My Nikon is in the repair shop)
Posted by Jay at 1:51 PM 1 comment:

While doing research for an upcoming article in MSJ I came across an Outdoor Life article written by Fred Mercer in 1960. The article was also reprinted in RMEF's Bugle magazine in 1993. The article is an account of Mr. Mercer's 1958 Montana elk hunt, on which he harvested a bull that to this day is the #1 typical bull elk harvested in MT. Click here to view the article (you'll need a Google account to view).
Posted by Will Jordan at 12:53 PM No comments: 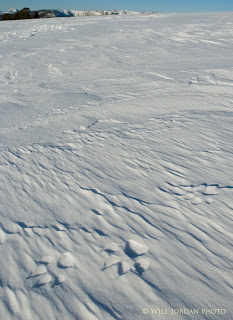 The current issue of Montana Sporting Journal features an excellent interview with Ed Bangs - the Wolf Recovery Coordinator for the U.S. Fish and Wildlife Service since the beginning of the gray wolf reintroduction in 1995. For those of you who haven't had an opportunity to pick-up a copy of the current issue, and are interested in the topic of wolves in Montana, the full interview is free to read by clicking here.

Here's an excerpt from a response that Ed Bangs provided in the interview:

"We predicted the wolf population would grow about 22% a year and it did. But I am surprised that we now have over 1,700 wolves. I believed (and still do) that the Northern Rocky Mountains will not be able to sustain that many wolves long-term."
Posted by Will Jordan at 6:52 PM 2 comments: