It may come as a surprise, but solitude can be found on the Bighorn River. The tailwater trout fishery is world famous, and rightly so, but all of the attention it receives during the summer months does tend to detract from the overall experience. Fortunately there is an off-season. November through March finds the river largely void of anglers, anglers who are missing out on the joys of cold fingers, iced rod guides, and productive fishing for large, hungry trout.

On Monday and Tuesday of this week a couple of fishing buddies and I found ourselves floating prime trout water below Yellowtail Dam. Despite the unseasonably warm weather, over the course of two days we saw only a couple of other boats. The fishing was very productive, with both nymphs and streamers taking scores of fish. The streamer bite was particularly strong, with a variety of colors and sizes taking fish from late morning through evening. 200-grain sink-tip lines were generally relied upon to pull fish from winter holding water. Nymph rigs consisting of soft hackle sow bugs and midge pupa drifted deep accounted for many fish, particularly earlier in the day before the streamer bite really picked up. Midges - and even a few baetis - were hatching, but there were very few fish consistently coming to the surface. 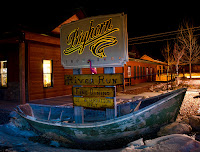 We were fortunate enough to share some time on the water on Tuesday with Mike Faris, a guide for Bighorn Trout Shop. To say that Mike's knowledge of the river was helpful would be a drastic understatement; I'm always amazed by how much I learn when in the presence of a veteran guide. For up to date river reports throughout the off-season (and a guide if you'd like), the folks at Bighorn Trout Shop are your best resource.
Posted by Will Jordan at 4:28 PM No comments: 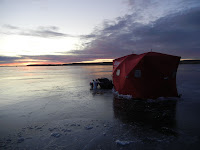 Typically in early January it is easier to find ice in Montana than to avoid it. In fact, on many lakes by this time of year fishermen are brave enough (or foolish) to drive one-ton trucks across 12-18 inches of hard water.
2012 has been an oddity thus far. As of today, Fort Peck reservoir is still void of ice on most of its expanse. Canyon Ferry has some ice, but it also has some areas that are not safe for an angler on foot. By this date last year on my January ice-fishing trips, we were driving on roads that were carved out of snowbanks and drilling through 20 inches of solid ice.
On this first trip north, we changed up our normal routine somewhat. Instead of driving on the ice, Laura and I pulled our gear with ice skates. We made it to our destination in a matter of minutes and were fishing as soon as the holes were drilled. To save weight, we carried a hand auger instead of a gas unit, which wasn't an issue considering the ice was only ten inches thick.
While the fishing was less than stellar, it was nice to be back on the ice with nothing to worry about except keeping your fingers warm and your bait fresh. While there is a lot of technology available to ice fishermen these days, the simplicity of staring at a hole in the ice, waiting for a subtle tap on your line, is a refreshing change of pace. We only brought home enough perch and walleye for one meal and since it was months removed the last taste of fresh fish, it was a welcome treat. As was being back on Montana ice.
Posted by Jay at 7:08 PM 1 comment: