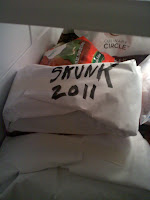 My name is Jay and I am a bird hunter.
That is my only explanation after finishing my 2nd big game season in a row without shooting an elk, antelope or deer. I guess I just shoot birds. Not the worst habit to have, but is it better to be a specialist or be mediocre at a handful of pursuits?
Granted, I passed on a cow elk, two miles downhill from the truck, the day after Thanksgiving. On the final day of Montana's big game season, I also chose not to shoot a decent muley buck, after watching him through my scope for a few minutes. I was after a whitetail this year. And, I haven't drawn an antelope tag in two years. But, I live in the middle of Montana, so no excuses will suffice.
But, if you find yourself racing home from deer hunting at 9AM on the final day of the rifle season, to pick up your bird dogs and go hunt pheasants somewhere, you might be a bird hunter. The pheasants came easy this Sunday, the dogs had a great time and I hunted in a t-shirt in late November. To heck with deer and elk.
Sure am glad that Dad shared some of his elk meat, though.
Posted by Jay at 8:29 PM 6 comments:

Finishing In The Sage

Upon returning to Montana from a trip to MN, where ruffed grouse and woodcock were on the menu, I added a couple of days to hunt pheasants once I crossed the border. Needless to say, shooting a big October rooster seemed like child's play, after fighting to get shots at crafty ruffs and diminutive woodcock in the North Woods.
Eventually I had to return to my email, voicemail and old school mail.
However, as I was nearing my home in central Montana, it dawned on me that the sage grouse season was about to close November 1st. Since I hadn't hunted sage grouse in a couple of years or so and I was in the midst of prime sage grouse country, I pulled over. The dogs were 7 days into a fairly intense road trip, but when their dog box opened, they still showed the same excitement they did a week earlier.
I grabbed just enough water for the dogs with about an hour hunt in mind. I headed for a large sage flat on public land where I had seen birds a few years ago. It was a case of deja vu, as the dogs became birdy on the same knob, pointing the same flock of sage grouse, which flushed in the same direction as years before. Obviously the birds were a newer generation, but everything else was a repeat. I only shot one big male sage grouse, not needing to shoot another majestic, native bird that is struggling in some parts. I headed back to the truck, but not before the dogs also found two coveys of Huns, which added to my mixed bag of birds very nicely, putting an exclamation point on my 2011 upland odyssey.
Posted by Jay at 8:37 AM 2 comments: