The Task At Hand 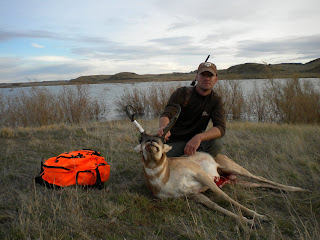 While the original intent was to hunt while the Montana antelope season overlapped with the start of the deer season, the plan was more one-dimensional than expected. Maybe it was due to the fact that we had good success on muley bucks last fall or simply that I did not devote enough time the previous autumn to hunt antelope. Regardless, once afield in eastern Montana, cousin Brian and I were definitely focused on pronghorns (his expensive nonresident license was probably the biggest factor).
Obviously, antelope and mule deer don't necessarily occupy the same habitat. But, if you hunt full days in the area we set up camp, you will see both species. We even saw some whitetails that ran off into the sage country, something that we are witnessing more of each year.
However, we did avoid our "classic" muley haunts, "The cedars", "Hells Kitchen" and "The Bedroom". The mule deer we did come across or glass at a distance, we ignored. Sure, if we had seen something that was out of the ordinary, we may have traded our antelope loads for something slightly heavier.
As it turned out, it was a good antelope hunt. Now I can get back to the bird dogs and give them the attention they deserve. There may even be time to hit those muley locations later.
Posted by Jay at 9:33 PM 1 comment: 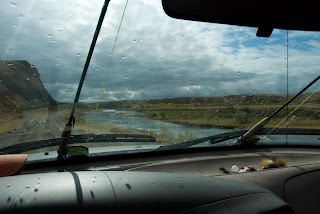 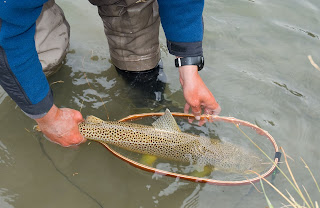 On Friday of last week a friend and I made the journey to explore a far away and somewhat unlikely trout fishing destination here in Montana. It's the type of place that you hear very little about, it's a long way from anywhere. To get to this water you have to pass by other rivers, fisheries far more famous. The prodigious number of MT fly fishing guidebooks on the market provide little, if any, useful information on this river. There are no shuttle services, guides or fly shops on this river, we were on our own to figure out the nuances of the fishery. That said, we did stop in at the Big R Fly Shop en route, where we loaded up on quality streamers without breaking the bank. These guys probably fish our intended destination more than anyone and provided some first hand knowledge.

We got our first glimpse of the river a few hours after departure. The water looked good, albeit it looked like more of a warm water river than a trout river - deep and slow. It was early enough in the day that we had time for a quick float to test the waters. At the put-in we could hardly get rigged up fast enough as a heavy caddis hatch had the river boiling with rising fish. Several casts later our X2 caddis only produced whitefish. As we floated downriver we were starting to wonder if there were any trout in this river. We continued to pick up quite a few whitefish (up to 19") on both dries and nymphs, but no trout. Finally after the sun dipped below the western horizon we connected with our first trout of the trip, a healthy 15" rainbow that drilled a flashy streamer in fast water. We were highly stoked to get that first trout out of the way, now we could get down to business.

Over the next two days we fished long and hard, floating and wading, stripping streamers, drifting nymphs and on occasion doing a little head hunting. We had good success for trout, although that success was concentrated to a few select locations on the river and came only after rotating through numerous fly patterns. By Sunday afternoon we'd learned a thing or two about this river and its trout, yet it hadn't been quite what we'd hoped...

That is until we decided to fish one last hole on the way home, a big run that we'd not yet fished. In that final hour of the trip and on what were essentially the proverbial last casts we found what we had come for...big browns. Look for a more in depth piece on this trip in a coming issue of Montana Sporting Journal.
Posted by Will Jordan at 7:04 AM No comments: