At this time last year my home water – the Gallatin River – had substantial anchor ice, shelf ice, and slush ice throughout its valley reaches. Looking back at my fishing log, the fishing was generally slow, if there was any fishing to be had at all. This year has been a reversal of fortune, in that the river has remained open and fishable nearly all winter long, its banks largely devoid of ice. The unseasonably warm weather has been the bane of hardwater anglers, but has resulted in some very good trout fishing not only on the Gallatin, but on rivers throughout Montana.

My home office is located just a stone’s throw from the lower Gallatin River and lately it has been a rare day when I haven’t managed to get in an hour of fishing during the warmest part of the day, mid-afternoon. Midges are hatching, and on overcast days a few fish can be found rising to them. The nymph fishing has been very productive with caddis larva, midge larva and pupa, grey and pink sow bugs, red worms, eggs, and increasingly, stonefly nymphs… the usual winter line-up.

Streamers have even been producing recently, both with an active retrieve and dead drifted. Reports have been surfacing of quality streamer fishing on the Yellowstone River near Livingston, with conditions even allowing anglers to float the river - an extreme rarity in February.

The trick to good fishing at this time of year is finding the winter holding water. Trout are not evenly distributed throughout a river at this time of year, rather they are congregated in the deepest, slowest holes. Where there is one fish, there are likely to be many more holding in the same location. I was reminded of this fact this past weekend while fishing the lower Madison River, where I caught all of my fish from just two holes along a half mile stretch of river. Repeatedly drifting through these holes produced fish after fish, and when the action died, changing flies (particularly the fly size) produced more fish.

As enjoyable as the winter fly fishing has been this year, I think most of us are ready for a solid dose of winter weather to close the season out - quality summer fishing depends upon it. The Gallatin and Madison watersheds are currently sitting at 70% and 74% of average snowpack, respectively. Old Man Winter has some catching up to do.
Posted by Will Jordan at 6:46 PM No comments: 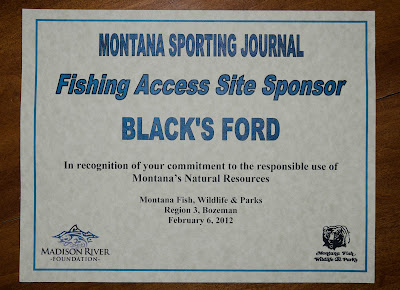 We just received our FAS sponsor certificate in the mail. MSJ has adopted Black's Ford FAS, a heavily utilized access point on the lower Madison River.

As part of the sponsor agreement we'll be organizing bi-annual clean-up events at the access site... stay tuned for dates and details.

Perch Are The Prize 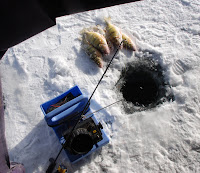 I used to fancy myself as a walleye specialist. If I was not catching eating-sized walleyes, in that perfect 1-2 pound range, with the occasional trophy, I was just wasting my time. Northern pike were slimy and perch weren’t worth messing with. While pike can still make a mess of your lines when ice-fishing, I have changed my opinion on perch.

Perch are an ideal winter species. They are great eating (walleye is a member of the perch family) and easy to fillet. Perch are often very prolific in the right fishery and their numbers can swell quickly, making them available and aggressive. When the perch population is robust, a bucket of fresh perch in an afternoon of sitting on the ice is a real possibility. The goal is to find the happy medium between good numbers of perch, but also maintain that “jumbo” quality, not a bunch of stunted fish.

A trip north this weekend was a perch outing on somewhat thin ice with the warm temperatures of late. Once on the lake, it was a matter of finding the proper depth and the right presentation that attracted the larger perch. Eventually, I settled on 29-30 feet of water, with a Swedish Pimple and a minnow head. A full minnow was too large and caused me to miss too many fish on the hookset. A mealworm enticed too many small perch to race to my lure. My Vexilar was worth its weight in gold.

As a result, I brought home about 18 perch to clean that evening. They weren’t perch pushing that coveted one pound threshold, but they were close. Dipped in Italian bread crumbs and fried in olive oil, the white flesh was like candy. Who needs walleyes, anyway?

The Untraveled and Unforgiving 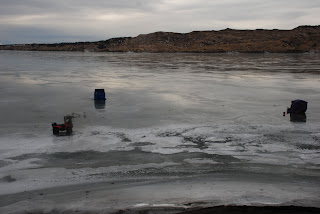 There are certain times when high-risk pays off with high-reward. Like shooting a big bull elk miles from the nearest road or catching your biggest trout in a remote mountain lake, sometimes hard work pays off.


On this one day ice-fishing trip, we didn't make it easy on ourselves. Dad, Scott and I were determined to try a remote access point on Fort Peck Reservoir that anglers rarely visit. We were betting on good ice in this fairly protected section of the lake and with the lack of snow this winter, the road appeared to be in find shape.

We left town at 5AM and were on schedule when we arrived within sight of the lake at dawn. We played it safe and left the truck on top of the final rise, before a steep drop to the water's edge. The ice was adequate; it varied from six to ten inches. There were some pressure ridges that looked sketchy, but none that we had to cross. 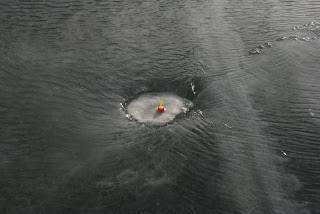 As far as ice-fishing goes, the day was balmy. No need to skim ice from the holes, Scott pointed out that despite it being the end of January, none of us wore gloves. Elk steaks at lunch completed our peaceful setting.

But, things changed quickly. The strengthening chinook winds from the west blew warm air that felt like a furnace. By the time we finished our midday meal, there was an inch of water on top of the ice. At times, we had waves on the top of the ice. Water was literally running down our holes like a drain. When we saw the ice near shore deteriorating before our eyes, we decided to pull up the lines.

The dry roads we had been impressed with on the drive in had turned ugly. Frost in the gumbo had been released, turning the top layer into slime. The four-wheeler had all it could do, pulling our sleds uphill, pushing mud in front of it. When we made it to the truck, Scott stayed on the Polaris, making sure the final stretch was fit for a vehicle pulling a trailer. We made it out to the main gravel road and all breathed a sense of relief.

As mentioned, if Fort Peck had rewarded us with a mess of walleyes or a monster pike, it would all have been a minor hassle. But, the fishing was less than spectacular with only a few, small fish to show for our efforts. It appears that this may be the shortest ice-fish season on record.
Posted by Jay at 7:27 AM No comments: