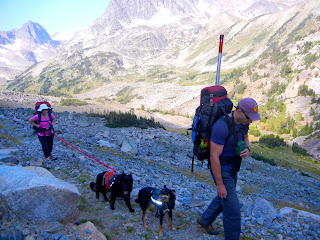 There are many reasons to trek into the High Country in August.  Typically, the temperatures across the  West are hanging in the 90s, versus the much more comfy 70s above timberline.  While fishing has begun to slow in some of the rivers and reservoirs in Montana, the angling in many of the mountain lakes is just reaching its zenith.  Lastly, hiking uphill, at elevation, with a fifty pound pack, is great conditioning for the upcoming hunting season.
For those that are unfamiliar with the Beartooth/Absaroka mountain lakes of southern Montana, the area is host to more hike-in trout water than most folks can fish in a lifetime.  With hikes ranging from short, level jaunts to week-long adventures into remote bodies of water, choosing your destination may be the most difficult part.  The variety of trout from golden trout and grayling to cutthroat and brook trout, add to the complex menu that the backpacking angler can choose from. 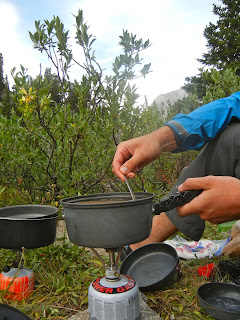 On a recent three-day, two-night trip, Laura, Mark, Lindsay and I parked a vehicle at one trailhead and commenced our journey from another, twenty miles away.  We fished three different lakes, caught three different species and only saw one other party fishing. There were a moderate number of campers we met on the trail, but most didn't even carry a fly rod tube lashed to their packs.  Fishing aside, the highlight was crossing a pass between drainages at 11,000 feet above sea level. Waking to mountain goats in our camp was a close second.
Every trip in the High Country leaves me wanting more.  As Laura said, having solitude at a mountain lake campsite makes one feel very rich.  This past trip was nearly perfect; the weather was ideal, the fishing was consistent and the company was great.  The only regret is that it would be my only alpine fishing adventure this year. 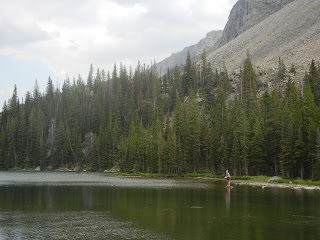 For those of  us that are lucky enough to feed bird dogs 12 months a year and hold our breath during every winter blizzard, hoping the wildlife will survive, we feel September 1st creeping up on us.  Yes, we are still enjoying summer, throwing big hopper patterns from a vessel or from shore, but a bird man savors the upland season like a football junkie salivates the opening kickoffs of autumn.
By all accounts (mostly mine), it should be a good fall, markedly improved from 2011. The past winter was a non-event.  In fact, for those of us that enjoy fishing through an eight-inch hole in the ice, there was a very reduced season to be had in most of Montana. Safe ice was in short supply. While the snowpack in the mountains was about average, it was mostly a dry winter across the eastern prairie. If there were major blizzards, I slept through them or just simply don't remember any.
The other major factor, the spring hatch, appeared to also be successful across central and eastern Montana. The spring was mild, without extended rainy and cool periods.  There was ample nesting cover and plenty of insects during the juvenile birds' vulnerable stages. Lastly, damaging hailstorms were also rare across the Treasure State.
Not everything is in place to make it the stellar season afield that it could be, however.  Thousands of acres of Conservation Reservation Program (CRP) grasses have fallen victim to expiring contracts and high crop prices. In other words, one of your favorite pheasant coverts or sharptail spots, may be black dirt this year. Also, due to this summer's drought, some counties in Montana have been granted emergency grazing or haying of CRP to help ranchers survive the record-setting, scorching summer of 2012. While not as widespread as the overall loss of CRP, it still removes some of the huntable acres from the menu this autumn. 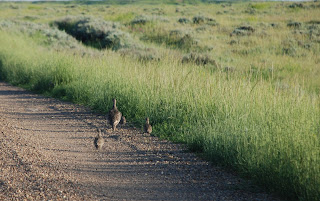 But, it will still be a fairly good season behind your beloved bird dog.  I have seen good broods of Huns, pheasants, sage grouse and blues this summer.  It appears that hatch was early and the brood sizes are healthy. I am counting down the days.
Posted by Jay at 7:45 PM No comments: