Catch a Fish, Thoreau it Back 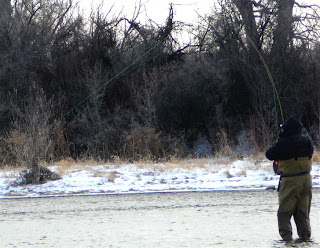 Henry David Thoreau once said, “Many go fishing all their lives without knowing that it is not fish they are after." Following a sub-par fishing weekend, that thought is comforting to say the least.

While I’m sure that a fly fishing weekend is not exactly how my new wife envisioned her first married Valentine’s Day, I’m sure she expected it to happen at some time. Fortunately the comfort of the River's Bend Lodge was some consolation. But as we stood cold on the icy banks of the Yellowstone at the trailing midge patterns through beautiful, yet tough to access, riffles, I think she understood my passion just a little bit more.

We stood staring up at Emigrant Peak with both of us wondering why we were still out trying. I questioned my fly choice, my drift, and my method. She no doubt questioned some of her choices as well.

Finally a sympathetic Brown trout, maybe a three pounder, took the edge off and took the Midge. As I started to bring the fighter in closer, I noticed a little icy build-up on my wife’s eyelash. This was one cold woman and one foolish man.

The Brown readily gave in and I returned the favor by smoothly returning him to the depths, thankful that I’d taken the time to bend the barbs on the flies. My wife, seeing her husband satisfied with his catch knew the cold day was over.

As we walked back to the Rivers Bend Lodge I think we both knew a little bit more about what Thoreau was trying to say.
Posted by Greg at 10:05 AM No comments:

Sometimes The Killing Is Hard To Accept 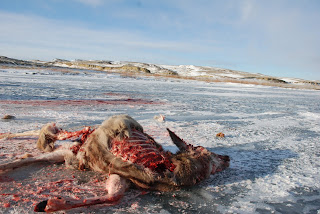 As we approached the area of the lake that we had fished the evening before, I could see something on the ice that wasn't there previously. Could it be a coat we had left, maybe a tumbleweed, maybe a coyote eating our dead minnows? The four of us approached slowly and without words. We were all hunters, but seeing this young mule deer that had died in the past eight hours, still struck a nerve with us.
It was obviously a violent, gruesome death, nothing I could publish in MSJ. The coyotes had killed the deer, on the ice, a place where deer are very vulnerable. Blood was pooled in a couple of different areas, patches of hide were drifting with the wind across the frozen lake. The coyotes probably numbered at least three from the number of tracks leading away from the kill site, possibly more.
I couldn't help but feel some sympathy for the mule deer. I tried to lessen the animal's struggle, thinking maybe it was sick, injured or was just dragged on the ice, already dead. Doubtful, I knew. Even as a hunter, someone who is also at the top of the food chain, I wish I didn't have to visualize what took place on the ice that night.
One of my companions was more at peace with the event. His rationale was fair and factual- sure one deer died, but that pack of coyotes, coyotes that struggle day after day to find food to stay alive, succeeded and earned another week or two on this earth. Survivors. Hunters. Just like us.
Posted by Jay at 8:17 PM No comments: