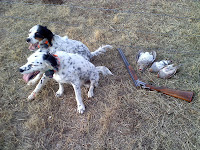 I really didn't have time to hunt today. I had bags packed, bags containing clothing for Big Sky skiing, clothes for the beautiful people. And it was windy as heck. Steady winds 25-30 mph, gusts more than that.
But, I had to hunt. The Montana upland season was coming to an end. And there was no snow on the ground, no other excuses to stay indoors this late December. This hunt was more for the dogs than me. My old girl Tess, would be nine by next season and at that age in a dog's life, there are no guarantees. When I grabbed my gun and orange vest, they confirmed how much they wanted to hunt. Jumping, dancing and whining. Thanking me and begging me.
Since I only had about three hours to make hay, I had to hunt close to town. Average habitat, but good enough. The dogs were intense, I was intense. When they got the least bit birdy, I got prepared, held my gun slightly tighter than I did earlier in the season. I walked fast, wanting to cover as much ground as I could, without snow, the birds could be anywhere. They weren't just forced to seek refuge in the heavier winter cover.
When we complete our first hike, about a three mile walk through fairly good grass, close to grain stubble, we never saw a bird. I had seen pheasant tracks in the ice on the creek bottom and had seen a number of Hun roosts on the higher ground. But, no birds seen.
Despite being nearly out of time and having a four hour drive ahead of me once back in town, I couldn't end the season on a somewhat sour note. The dogs had hunted hard, but with very little reward. So, I crossed the highway and tried one more spot, a long shot, but with this mild December weather, the birds could be there.
And they were. Tess pointed three sharptail that took flight from a higher elevation. I shot quickly, hitting the bird, but decided to take a 2nd shot, to confirm that it was dead and a prize for the little setters. It might sound like fiction, the quest for the perfect ending, but it was. I was almost to the truck, when Abby pointed and Tess backed her. I took one step and a small covey of eight birds rose up. I emptied both barrels, dropping a Hun for each dog to bring back to me. I nearly had tears in my eyes, noting how perfect of a finish it was.
Posted by Jay at 4:33 PM 1 comment:

In Montana and other states such as the Dakotas, some autumns our upland seasons end early, occasionally as early as Halloween. Snow can fill the grasslands completely, often icing over, creating a crust that is unfriendly to both dogs and birds. Sure, the birds are still out there, but often they congregate in farm yards, making them off-limits and just as well, if they are subject to five months of winter survival.

Thus far, 2011 has been a wingshooter’s blessing. There has been only one significant snowfall to date and the bulk of that has melted. Pheasants are still seeking refuge in tall CRP and Hungarian partridge are spending their time, well, where you find them. I am still seeing coveys in stubble fields and the shorter grasses, and on sunny hillsides. All of a sudden I am making up for lost time, days that were taken up by work, big game hunting and other necessities of life.

Despite the obvious added hunting opportunities for hunters and our beloved gun dogs, perhaps the biggest benefactor is the birds themselves. They are still enjoying the good life, having plenty of access to food and continuing to put on fat reserves to survive the winter ahead. Fortunately, we are already down to just three months of it.