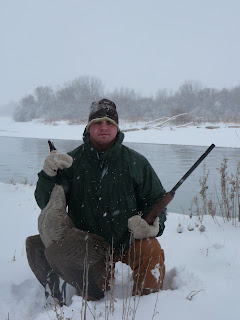 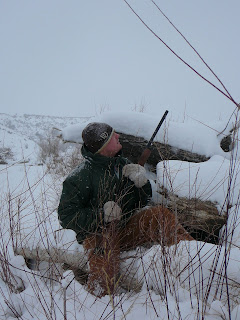 I have no idea how many birds I’ve shot in my life. When I was a youngster I thought I’d always keep a count, but that ended 15 or more years ago. What I know is that the number is insignificant.

I love to hunt, but more than my passion for waterfowling is my passion for teaching people to enjoy this bit of my life. As we were out on the river today I recounted with my hunting partner just how many people I’d been with when they had their first successful hunt on the river. I remembered the excitement that each one showed with the first goose that fell from the sky.
Today I hunted with a guy I coached in high school football just a few years ago. He tagged along with our hunting parties a few times, and last year purchased his own Remington 870 with Christmas money. But aside from a day of shooting trap and maybe a grouse or two that crossed his path, Mikey hadn’t had a chance at the first goose.

But today it all changed. With more geese on our stretch of the Yellowstone than I’ve seen in my life we got into some great shooting. The birds came willingly and after a few missed opportunities on both of our parts, Mikey dropped his first Canada goose. The bird pitched into us and gave as that full front shot that we all love to have. Mikey converted the shot and was soon celebrating his first success of many to come.

And on the way home he said the same thing that all those other first time goose thumpers have told me in the past. . .and it’s that statement that makes the number I shoot completely insignificant. After talking about the shot, the weather, and everything else associated with the hunt, he turned and said, "Coach, I’m hooked on this."

And in taking all these guys on their first hunts I’ve created for myself a lifetime of great hunting partners.
Posted by Greg at 11:33 AM No comments: 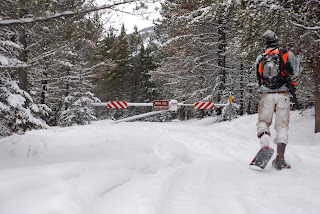 Montana is blessed with a liberal elk hunting season that typically extends for about five weeks and allows resident hunters to pursue bulls across much of the state with nothing more than an over-the-counter license. You would think that such generous regulations would result in a relatively easy hunt, but you’d be wrong. The truth of the matter is that in many elk hunting districts older age class bulls are few and far between and further complicating matters are the issues of access, weather, and etc., which I’ll refrain from belly-aching about.

I took some pride in toughing out the recent, and ongoing, frigid winter conditions during the final days of the ‘08 extended elk season, but I also realized there was little reason I should have been out there. Had I been better prepared and done my homework prior to the season’s start I could have been at home comfortably watching the snow fall outside, instead of getting distant glimpses at the odd cow and calf. Instead, I spent a couple of frostbitten days bundling up, snowshoeing in past closed forest service gates, and prying my frozen eyelashes apart.

The onus is on me, no excuses. Looking ahead to the New Year and reflecting on changes I’d like to make, I resolve to spend some time scouting for elk.
Posted by Jay at 6:15 AM No comments:

Calm Before The Storm 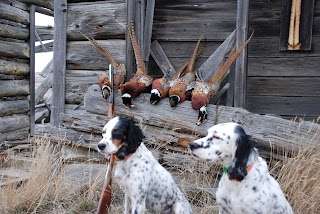 12/12/08 While a major winter storm forecasted altered my plans to take a hunting trip east this weekend, Dad and I sneaked out for a day of bird chasing. We had decided to hunt some remote parcels, coverts that might be difficult to access once the snow begins to drift on the prairie.
The day started out poorly, as we had a rancher (or rancher's hired man), slam a door in our face, when we were just trying to get his take on a public land boundary, near his ranch. We didn't want to take any chances with a crackpot like that, so we vowed to come back another day. As a result, no Christmas card for him and our Hun plan changed to a pheasant one. (It also made me log on to the PLWA website and make a donation when I got home. These guys are an outspoken group that does a lot of good work. Check them out.)
The birds and the dog work saved the day. There is some sentiment from a few birddoggers that pheasants are the devil and can ruin pointing dogs with their propensity to run. Sure, they love to run-especially in December, on ground that has been hunted by many. But, the birds can't run forever. Dad and I shot 5 roosters, over points. The shooting is the easy part, sort of a necessary evil to reward the dogs for scenting, pointing, relocating, pointing, relocating........I am amazed at how dogs can handle Huns, ruffed grouse, blue grouse, pheasants, sage grouse, sharptail and woodcock, all in a span of three months. They all reside in slightly different habitats and respond differently to dogs and hunters.
And yes, the storm came. Hope those birds find cover.
Posted by Jay at 2:14 PM No comments:

Not Time For Sunday Football Yet 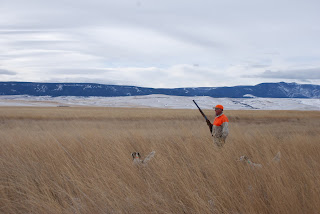 12/7/08 After chinook winds warmed the temperature in central MT from 10 degrees to 40 degrees overnight, I called Dad and talked him into a brief pheasant hunt. I had to skip a 1/2 day of office time and he had to skip a 1/2 day of retirement. Easy sell.
Unless I make a trip out of state to hunt chukars or quail, my bird hunting window of opportunity is closing rapidly. For the most part, our season here closes January 1. Any hunting in December is usually a bonus, as snow conditions can make hunting tough and life on the birds even tougher. For now, easy going. And after a very busy season of hunting deer, antelope and elk, the dogs were left at home more than I prefer.
With the benefit of chinook winds warming the air across the prairie, comes the wind itself. Abby and Tess did fine considering they were chasing running roosters in tall CRP that was swaying in the strong breeze. The sharptail were jumpy too, but instead of using their legs to avoid hunter and canine, they just flushed earlier than normal. No complaints-plenty of birds, good dog work and after all, it is December.
Posted by Jay at 9:37 PM No comments:

From Deer Camp to Elk Camp 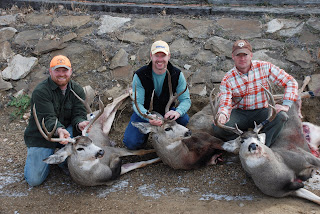 
11/24/08 Arrived at camp around 11AM. Sent Blair out to scout while Brian and I set up camp. We caught up to Blair just before dark, as he glassed ridges we planned to hike to the next day. Saw plenty of tracks-both humans and elk.
11/25/08 Blair went north, Brian and I hiked west, putting on some serious 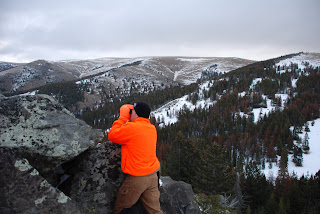 miles. They all seemed up hill.....I made a drive up a ravine for Brian, but the only thing I moved his way was a lion. Heard a shot, just before dark, had to be Blair. As we awaited his story in camp, he arrived, late and disappointed. He took a shot at a cow, through the timber, but missed. Not an easy shot, he felt, but a makeable one.
11/26 Blair's last morning-he went west, on some large, fresh tracks. The trail went beyond the forest service boundary, onto private land. Smart bull. Brian and I wandered dark timber all day. I found fresh tracks and scat, eventually leading me to a glimpse of a fleeting elk. A big, lonely bull? I will never know.
11/27 Will arrived in the morning darkness. He hiked high and far. Will was rewarded for his efforts, seeing elk, eventually being surrounded by barking cows and a few spikes. Nothing worth shooting at this point. Brian and I wandered familiar country, looking for fresh sign.
11/28 Day 5 and still no fresh snow. Brian and I went north out of camp, glassing some meadows at daybreak. The elk have gone nocturnal, not showing themselves in the open at all. We rushed back to camp at lunch, eating in minutes and heading out in a new direction. Our final hunt was in a scenic bowl that elk seemed to have used since the last snow. Not today, however. Will returned to camp again late, with only good stories of elk spotted. He would see a nice bull on his final day, but never get a shot. 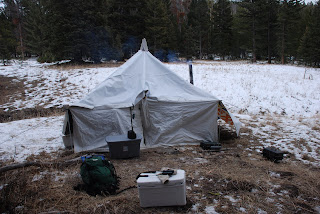 Our elk camp wrapped up with a few close calls, a lot of good meals in the wall tent and of wishes for fresh snow next time. Luckily, half of the fun of elk camp, is camp.
Posted by Jay at 11:33 AM No comments: