I'm back in front of the computer on this stormy Monday morning, working, following an abbreviated elk hunt. I returned to Bozeman - on the afternoon of day 2 of what was supposed to be a 4 day hunt - with nothing but excuses.

Things were going according to plan as I arrived in camp on Friday afternoon, a warm wall tent and a cold beer awaiting me. The alarm went off at 4am opening morning and after a hot breakfast we hit the trail, climbing high into some great elk country. We got to the top a half hour before first light and split up, making plans to reconvene at noon to compare notes. Over the course of the morning I covered a lot of country, making a brutal loop that took me up and down ridge after ridge. I was into elk, but passed up a very marginal shot opportunity at some cows nervously milling around in heavy timber after I sneaked into their bedding area.

On the way back to our pre-determined rendezvous point, I bumped a lone spike bedded at the upper end of some north facing timber. He made the foolish mistake of running over the top of the ridge and onto a big open slope, where he dodged no less than a dozen bullets lobbed from obscene distances by other hunters.

There was blaze orange everywhere, particularly along my ill conceived route near the western border of the National Forest, where unbeknownst to me, hunters were easily accessing the area from private land. I'd never been to this location on opening morning...and probably never will again - it was a circus.

When I met back up with my comrades, I learned that although they too got into elk that morning, their plan didn't work out quite as intended. Prior to the hunt they'd scouted a herd which was making use of a high saddle for two straight days prior to opening morning. Their plan was to ambush the herd at that saddle. Well, long story short they bit off more than they could chew with the hike to the saddle, and weren't there at first light. Other hunters beat them to it, downing a couple of elk at the saddle just minutes into the season...those guys had it dialed.

After lunch I elected to stay up high for the remainder of the day, too stubborn (or smart?) to give up my hard earned elevation. I was pretty worn out from my ambitious morning hike and decided to sit and watch an old burn for the evening hunt...nothing materialized. I arrived back in camp long after my hunting buddies, and they had good news and bad.

The good news: when we parted ways after lunch, they dropped off the divide into a rugged drainage where one of them harvested a nice mule deer buck. The bad news: a Forest Service employee had just stopped by camp and informed them that we had to tear down our camp and be out of there by Monday morning at the latest! I was livid.

We were aware of the fact that there was heavy machinery and new culvert material located a couple of miles down the access road. What we weren't aware of was the fact that the contractor had dropped the ball and didn't get the project done over the summer as planned, and he had the audacity to think he should commence the project (which would require shutting down this dead-end access road) during the general hunting season! But as much angst as I have for the contractor, I'm even more upset with the Forest Service. After the ranger stopped by camp on Saturday evening, we decided to hunt close to camp on Sunday morning and pull out that afternoon - we had little choice in the matter. No sooner had we torn down the wall tent and loaded up the trucks, a different FS ranger stopped by camp. His update on the road closure status was bittersweet. Apparently the agency had come to their senses overnight, postponing the project until next summer.

So here we were, Sunday evening with camp completely packed up and a cold, heavy rain socked in. I would have been all for erecting camp again, in the rain, and staying for two more days, but no one else even seemed willing to consider that option.

It was a disappointing way to begin the '10 hunting season, but fortunately there's plenty of time remaining.
Posted by Will Jordan at 8:28 AM 4 comments: 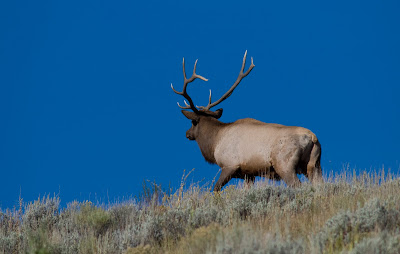 I can see the light at the end of the tunnel.

After a couple weeks of working some very long hours to get the next issue of Montana Sporting Journal off to the printer, we're nearly there. We're proofing article layouts, making final edits and waiting on artwork from a couple of advertisers. Our art director, Rebecca Reinker, has done a great job on layout for us yet again. Her behind the scenes work, attention to detail and eye for design are particularly impressive this issue.

We've had our challenges with this issue, Rebecca's Mac computer self destructed less than a month ago, leaving us scrambling to pick up the pieces and get this issue completed, but we're nearly there.

I'm increasingly having a difficult time keeping my mind on work...Montana's general deer and elk season opens this Saturday. I've been looking forward to that day for a long time and now there are just under 72 hours to go before shooting light on opening morning. Our rifles are tuned up, backpacks are full of gear and anticipation levels are high. This weekend I'll be focusing on public land elk, hunting out of a traditional elk camp in the mountains of SW Montana.

Good luck to everyone getting out this weekend!
Posted by Will Jordan at 7:56 AM No comments: 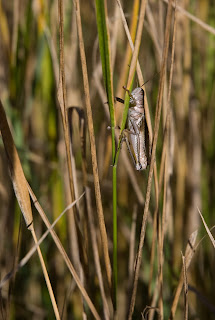 Yesterday I fished hoppers on a MT trout river close to my home. I hadn't expected to have the opportunity to fish the big terrestrials, considering that it was October 7th. In fact I was pretty much resigned to nymphing deep on this bright, sunny fall day. A funny thing happened as I walked the path to the river, dozens of hoppers scattered in the grasses ahead of my feet! At the river's edge I tied on a big, yellow, Morrish hopper - a pattern that had produced nicely for me throughout August and September.

The ensuing action wasn't off the charts, and in fact most fish took the beadhead pheasant tail that was suspended below the hopper. Yet there was a window of time, perhaps two hours in length during mid-afternoon when the fish were taking the dry fly. Several small rainbows, along with a couple of nice browns, seemed to know - as I did - that hopper season was waning. They took the hopper with reckless abandon, reveling in their good fortune of an Indian Summer. 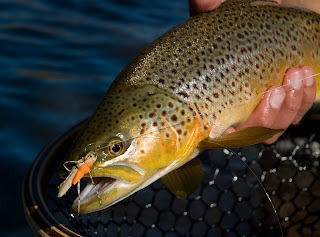 Looking out the window this morning, it is cloudy and gloomy...a baetis day, but certainly not a hopper day. Looking at the extended forecast, it appears that a frost isn't in the cards tonight and that Saturday and Sunday will again be warm and sunny. This weekend will, more likely than not, be the last opportunity to effectively fish hoppers for a while in Montana. In fact, by my count we're looking at nine, long, hopperless months...you can probably guess what will be on the end of my line this weekend.
Posted by Will Jordan at 7:26 AM 1 comment: