Time For The Blues 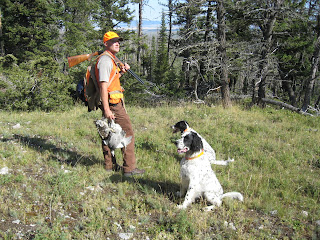 I don't claim to be on top of all pop culture, but since I was headed to an upcoming Modest Mouse show in Billings this week, I had been listening to more of their stuff of late. One of their more well-known offerings is called Fire It Up. I am not hip enough to know the lyrics or the song's meaning, but the catchy chorus was in my head all week previous to the MT upland opener. It was simply time to fire it up.
Dad still calls the shots when it comes to central Montana hunts, so I simply had to pack my lunch, grab the dogs and gun and be ready to roll Tuesday morning. The hunt started with a two mile ascent. In fact, there was no need to even throw the 20 gauge shut, until about two hours after leaving the truck-quite a bit of work, just to start hunting. (Right now would be a good time to name names, guys my age that wouldn't be able to hang with my Dad, in his 60s, but I won't do that to them)
The day was more fruitful than what I deserved; I had multiple easy shots at blues, over points. While the day was warm and dry, the balmy weather also put more birds on the ground, instead of perched in trees. We probably moved 20 blue grouse in our three hours of actual hunting time. The day was complete when Abby found a blue that had died after coasting farther downhill than we had guessed. This is why I still listen to Dad; his hunches for successful days are often correct. If the weather cools, maybe sharptail and sage grouse this weekend in eastern Montana. It is definitely time to fire it up.
Posted by Jay at 8:38 PM