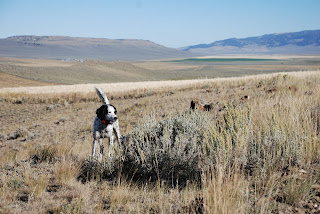 With the daytime temperatures of 90 degrees in the rear view mirror, it is finally fit for man and man's best friend afield. September in Montana has been more like August. In fact, I have only been out carrying a shotgun (and a lot of water) a handful of times. And as of this typing, the bird-chasing days have yet to extend much past noon, due to the balmy weather. I can pace myself, but unfortunately, the dogs do not, so I play it safe.
But, now it is time to get serious. The cool, damp mornings are good for scenting, good for keeping dogs and hunters fresh. The young, smallish Huns of September 1st, are now three weeks older and sportier. Farmers that were patient about letting their grain mature into September, are now expediting their harvesting operations.
It is also time for the upland enthusiast to make hay. As we get into October, anything can happen with the weather. A foot of snow can accumulate before the Trick and Treaters are out and about. For those of us that like to put some meat in the freezer, we know that big game hunting seasons will also take time away from the bird dogs, who dread rifle seasons, excursions that leave them at home. Those same dogs are now a year older than they were last season and a year for a dog in its prime is beyond priceless.
I think I need to hunt tomorrow morning.
Posted by Jay at 7:50 PM