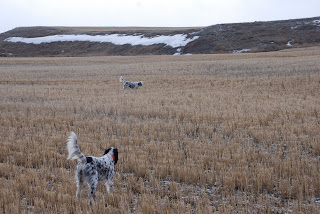 When the calendar turns from March to April, I yank the dogs off the couch and give them the fresh air they deserve. While I have stayed in perfect physical condition over the course of the winter(ok, I may have slipped a little bit),the dogs have definitely put on a few pounds. When I grab their hunting collars off the shelf, their excitement screams, "Its about time, buddy!"
In this latitude, I prefer to wait until April 1st to run the girls. Since I chase grouse, Huns and pheasants until the very bitter end of the season, I cut the birds some slack by not pestering them until I know the worst of winter is behind us. While we received snow AGAIN last night, it melts quite rapidly from this point on. April is actually a fairly important month from my perspective. Once the middle of May rolls around, the dogs are kept on leashes since nesting season is approaching. While I don't pass judgement on those running their dogs all winter, especially in regions where the snow doesn't pile up, I am adamant about staying out of the uplands when there are eggs and chicks on the ground.
It was great to see the prairie mostly unchanged from when I last walked it in December. However, the grass was a little flattened from snows and the ditches still held some hard-packed snow drifts. And the Huns the dogs pointed were mating pairs, instead of coveys. But, when a rooster squawked at me from the same brushy draw as one did in November, I felt like I hadn't missed a thing.
Posted by Jay at 9:23 PM