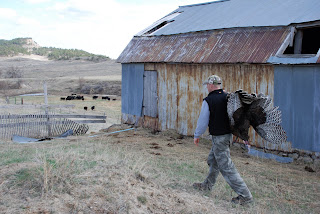 With the ongoing debate over land access, to both private and public lands, it was refreshing to be wanted. Wanted by ranchers who were seeking hunters to help thin out their turkey flocks. While the problem isn't statewide, there are a number of folks in the southeastern part of the state who are tired of having 50-100 birds on their haystacks all winter.
When Ryan Y. had arranged for us to hunt on a few large "spreads", I was a little pessimistic, assuming we would be directed on where to hunt, probably asked to shoot our birds as they entered the farm yard for their nightly feed. While a bird is a bird, I would rather try to lure the bird in with a call and a decoy.
Fortunately, I was dead wrong. We were set loose on a 20,000-acre ranch, with rolling hills and timbered draws. It was definitely turkey country that was made for the foot hunter wanting to cover some ground. Our only limitation this trip was weather. A bird was tagged each of the first two days and the third day was a "snow day". We had three inches of wet snow and we didn't want to rut up the wet, greasy roads, possibly ruining our good relationship with the rancher. Hopefully, we will be welcome again next year.
Posted by Jay at 8:07 PM