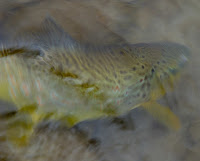 "Going elk hunting are ya?" hollered my neighbor as he peered from under the hood of his Buick. It was an astute observation based on the dozen trips I'd just made from my house to the truck with the necessities for an extended hunt in the high country. When I emerged from the shack with a final load of gear my well-meaning and all-knowing neighbor took notice of the contents clutched in my arms. Audibly prying himself from the confines of the engine compartment and portraying a perplexed look he stammered, "I thought you were going hunting." I explained that the reason for the waders, rod, net, and etc. was that I was actually going fishing, but first needed to secure some material for a few elk hair caddis patterns. As he shook his head and reacquainted himself with the intricacies of the internal combustion engine I realized that my attempt at humor was lost on him. The brief exchange would probably only provide fodder for the "odd neighbor" conversation that was sure to follow over dinner with his wife that evening.
My route to elk camp, via Hwy 89, would be taking me near a favorite piece of trout water, close enough to justify a detour, hence the fishing equipment. That afternoon of fishing was time well spent with several browns up to 18" aggressively striking just about any streamer I threw at them, dead drifted or stripped. The browns were decked out in their fall colors, although I saw only the occasional redd. There was no let up in the action and as I worked my way upstream I realized that the overcast sky and absence of a time piece along with the good fishing, had conspired to keep me on the water much longer than I had intended. After one last cast I was back in the saddle with snow capped peaks filling the windshield as I wound my way up the road to elk camp. For those interested, this fishery was covered in the Mar/Apr '07 issue of MSJ (see web store to purchase back issues).
Its fortunate that my fishing success didn't hinge upon my ability to obtain a supply of tying material for elk hair caddis. After hunting hard and seeing lots of game, including elk, I left the mountains empty handed. Before November and the elk season have run their course, I'll return to hunt the high peaks and ridges, undoubtedly making a detour along the way to fish a favorite trout stream in its fall glory.
Posted by Will Jordan at 9:56 PM