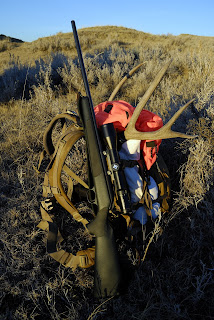 As the Montana general big game season nears its conclusion there is always a sense of urgency to get out and make the most of the remaining days afield, after all next season is a long way off.
This is a great time of year to be out under the big sky, and many of us at MSJ have been out conducting some "field work". I just returned from a few days of mule deer hunting in the eastern part of the state, chasing love struck bucks through sage flats and coulees. Our camp went 4 for 4 on mule deer bucks. No B&C trophies, but respectable, hard earned bucks.
On the last day I had to hunt I spotted a big bodied buck chasing a doe along a ridge. I had passed on bigger bucks earlier in the hunt, but at this late hour he was looking good. After quickly cutting the distance between us I peered over a rise and there he was just 200 yards away. I promptly found a solid rest, took a few calming breaths and squeezed the trigger - putting an end to the mule deer chapter of my '08 hunting season.
Now its back to the office for a couple of days returning voicemails and emails before finishing out the '08 season in elk camp...
Posted by Will Jordan at 1:40 PM