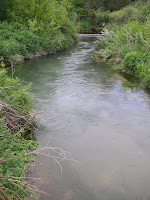 I often lament the fact that I live far enough east in the esteemed trout fishing state of Montana to make a quality trout fishing trip just that, a trip. From Billings, the Madison, Gallatin, Missouri, Big Hole, Beaverhead, Blackfoot, Bitterroot, etc. - even the upper Yellowstone all require a multi-day trip to really fish effectively. Granted we've got a few trout fisheries within an hours drive, but they aren't secrets. I was in desperate need of a local, unpressured trout fishery. Impossible you say? I thought so too until recently.
I received a tip regarding the possibility of a local stream holding a few trout...I'd chased weaker leads before. With map in hand I pointed my truck south in search of this unlikely trout stream. After a few miles on pavement, followed by a few more on gravel I arrived at the waters edge. What I stumbled upon that day was a legit, high quality spring creek. More importantly the creek was teeming with trout, mostly browns and mostly small, but also with a few large surprises lurking in some of the deep holes. This location has the makings of a year round fishery and is close enough to home for the occasional nooner when I need it.
Energized by my recent discovery, I now have about a dozen local and easily overlooked streams circled on my map; all locations that I intend to explore with a fly rod in hand. While I don't expect it, one or two of them just might have a surprise in store.
Posted by Will Jordan at 9:14 PM