Get Yer Elk Yet?

The transition from following bird dogs around the countryside to hopefully following elk around the mountains is not as easy as you would think.  Bird hunting is fairly routine after nearly 30 years of it; the dogs come and go, hunting partners change, but other than that, it is fairly consistent.  Not boring or mundane, but the outcomes are fairly predictable.
When the .300 WSM replaces the 20 gauge, a different skillset is required, perhaps more finesse is also needed. No more tramping around the hills, yelling at dogs, joking with peers when wary elk are concerned.  Slapping the trigger on a rifle doesn't work, unlike the more abrupt style of wingshooting that is second nature to me.  Getting a 600 pound animal out of the woods also takes considerably more planning than the three blue grouse one is allowed per day.
But, while the lows of elk hunting can be lower than the worst day bird hunting, (missing or wounding an animal, ending up miles from truck after dark, etc.) the high points are also greater.  When the success rate of Montana elk hunters hovers around 20%, each elk harvested is not to be taken lightly.
So far, my elk season is about average.  I have seen elk, amidst the timber, heck, even smelled them. In other words, I have "been into 'em", as they say in local bars and cafes.  Conditions for success haven't been perfect, but they have been good enough. And, the hunt itself has been enjoyable, as well.
Matt and I had a nice elk camp in central Montana last week, despite the effort it took to pull a wall tent, stove and the rest of the 100 pounds of gear via sled, into the backcountry.  Some might say it didn't pay off, but that is only if your idea of success is pulling the trigger.  The weather was good, the woods were ours and ours alone, and we ate well.
I returned to civilization, just in time to get the message from Dad: "Could use your help tomorrow. Got a bull down a few miles back." Roger. Success in the family, is success overall, when it comes to elk and the precious meat one bull can provide.
I haven't got MY elk yet, but there is still plenty of time remaining.  And, the sooner I can get back to chasing pheasants and Huns, well, the happier the dogs will be. 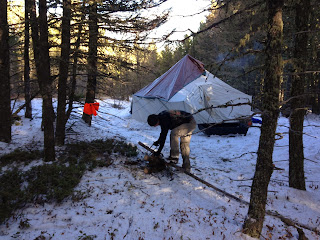 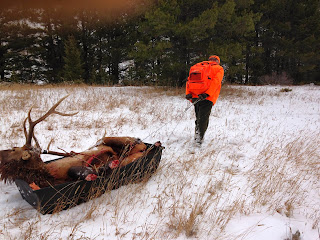