Easy Pheasants. Get 'em while they last. 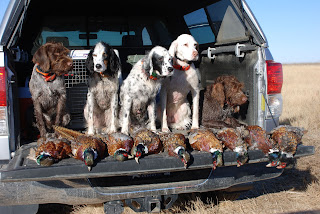 Opening weekend is always half social event, half hunting.  The birds are young, plentiful and uneducated.  The opening-day hunters are out in full-force, staking out their "A" plan before dawn.

This opener was no different.  As we sat in the truck, listening and watching arrogant roosters as they flew from the stubble into their refuge in the CRP, it was evident that we would be seeing plenty of birds. The three of us had seven dogs between us, trying to decide which three or four would get the call this morning.  The only other decision was how long to sit in the truck before letting them loose.

We waited until 7AM.  The first bird was brought to hand at about 7:15.  By 8AM, we had five birds in the bag, the dogs doing their best to stay focused, despite the wave of overwhelming bird scent.  The morning hunt was casual, despite being our first outing for ringnecks.  We enjoyed ourselves, taking photos of the young dogs earning their first wild birds.  By 9AM, we were walking the road back to the truck, trying to keep the dogs from needlessly pointing birds that would be there tomorrow.

Before you declare this post as boastful, keep in mind it is far from an ideal day.  Shooting opening day roosters is not the challenge.  Young birds that sit tight for a pointing dog are fairly easy sport.  And who wants to be done at 9AM?  Some of the dogs hadn't left their kennels yet, wondering what they did wrong to draw the short end of the straw.

But, as anti-climatic as opening day can be, it won't last. In fact, day two is typically 30% more difficult than day two and day three, well, no guarantees of limits anymore.  As roosters are bagged and the others become wise in a hurry, pheasant hunting changes rapidly.  Snow can come by Halloween and some days, it is difficult to have a bird sit tight for a trained bird dog.  I won't complain about the easy pheasants; from here on out, they only become more challenging and a lot more rewarding.