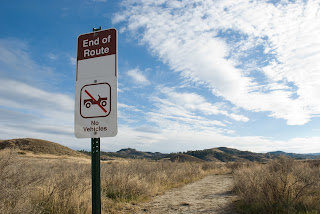 The pressure was on for Friday, we had three tags to fill and this was the last full day to hunt. We kicked things off with a strong pot of coffee and a big breakfast comprised of biscuits and gravy, eggs and canned peaches. My Dad and I planned to penetrate a couple of miles into a roadless area today. We had a bit of a drive ahead of us to get to the trailhead, but made good time and found ourselves alone at the trailhead at first light.

Things looked promising early on, with several does quickly spotted. Unfortunately we couldn't find a buck. Our bad luck held out as we worked deeper into the roadless area, seeing does, but no bucks. When we finally did see a buck, things still weren't going our way. We'd stopped at a great vantage point to glass a big drainage. We'd been sitting there for a good 5-10 minutes when suddenly a buck and doe bolted out from the bluff underneath us - they'd been bedded no more than 30 yards below us that entire time! The buck, a 3x3, stopped briefly at a hundred yards, but my Dad's rifle was just out of reach.

We saw upwards of fifty elk in the morning, including some good bulls. Deer numbers just didn't seem as high in this area - perhaps due to the higher elk densities, perhaps not. Regardless, we decided to abandon the roadless area in favor of some country closer to camp where we'd been seeing excellent numbers of deer throughout the hunt.

Sure enough, as soon as we'd driven into the general area that we wanted to hunt for the afternoon, I spotted a herd of deer about a mile away, far down a deep drainage. Through my binoculars I could see that one of the deer was big bodied, a mature buck no doubt. Upon taking a look through the spotting scope my suspicion was confirmed and we set out after the buck.

We made good time dropping down to the herd's last known location and the wind was in our favor. We had plenty of time, a solid hour of shooting light remained, so we crept in, glassing thoroughly in an effort to relocate the herd. When we slowly peeked over the top of the drainage that they'd likely fed into, sure enough, there were deer. Two does. I glassed the drainage quickly, but thoroughly (or so I thought) and concluded that these were different deer, as no buck was in sight and there were fewer does. We were dejected, but still had some light remaining and decided to hunt our way back to the truck. We moved down the backside of the ridge a couple of hundred yards before I decided to peek back over at the does...just in case. I chose a terrible spot to peek over - I had nothing for cover. As I peered over the ridge I immediately new I'd screwed up, directly across the drainage was a big bodied deer - bringing up my binoculars revealed a solid buck - a buck that had seen my big head bobbing on the bare ridgeline. I dropped back out of sight and instructed my Dad to get ready for a shot, that the buck was moving up the opposite ridge and would be coming into our line of sight quickly. Within seconds a pogo-sticking buck could be seen on the top of the opposite ridge - 200 yards away. The buck stopped for a few brief seconds to look back, I instructed my Dad to take him if he could - but he hadn't had quite enough time to get set-up and the buck vanished over the ridge unscathed. 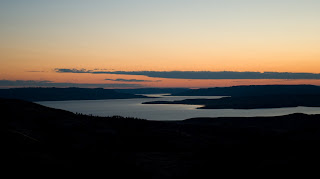 While there was still a half day, morning hunt on the horizon for Saturday - in all reality the sun had set on this hunt. It was a great hunt, and any hunt that I get to share with my Dad these days is a special one. For him it was all about the experience, seeing new country and enjoying the time afield and in camp, pulling the trigger wasn't paramount.

Back at camp that evening we learned that Matt had found success - looking to fill the freezer, he'd harvested a "meat buck" in the morning. They saw a monster buck late in the afternoon and managed to close the distance, but by the time they were set-up for a shot the bedded buck had blended into the surrounding sage in the low light. Dave made the ethical choice and chose not to shoot.

With our tags filled, Matt and I had the luxury of sleeping in on Saturday morning, while our fathers hunted together for a few hours. By the time they'd returned from their morning hunt we had camp torn down for the most part and had even found time to wet a line in the reservoir.

With any luck this hunt, with these guys will become something of an annual tradition.
Posted by Will Jordan at 5:55 AM