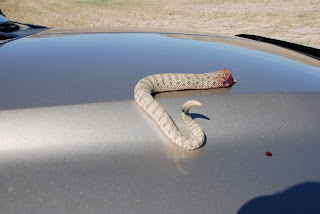 For those of us that love our dogs like children, we treat the animals as such. We cringe when we are forced to leave them overnight in a kennel, would prefer that they never are transported in a dusty dog trailer and definitely wouldn't let them ride around in the back of an open pickup bed.
No matter how hard we try, there are still risks out there. On a recent hunt in central MT, it was full of bizarre events, causing me to question if I was crazy for hunting the Montana prairie. I made it home after a couple of close calls, either of which could have been tragic.
The first oddity was a coyote that was as brave as any I have seen. Maybe it was young and naive, maybe it had rabies. Regardless, it was a predator that was fixated on my two, white, setter girls, oblivious to the fact that a human was with them, giving them water, as it slowly creeped closer. At 40 yards, my partner said, "You'd better shoot", so I did. That finally averted the coyote, but then the dogs were confused, taking off in pursuit of the wounded predator. Moments of chaos followed, with my dogs finally at my side, fortunate that the coyote didn't put up a fight in its last stand.
Later that day, with blue skies and a temperature near 65, I was enjoying myself, watching the dogs work the edge of a stubble field for Huns. Perfect weather for hunting and as I found out, a perfect day for rattlesnakes. Typically, one hears a rattlesnake before he sees it. In this case. the rattler was coiled like a cobra, slightly taller than the grain stubble, catching my eye just as Tess and Abby both neared it from opposite sides. Instinctively, I cut it in two with a shot from my 20 gauge, the dogs not realizing what the commotion was for.
Throw in a porcupine that could have presented more of a hassle than a danger and a deep, open well, there was plenty of excitement to be had. No, I don't shoot everything I see when afield. The porcupine was spared, in case you are wondering. But, when events unfold in just seconds, as in the case of a fearless coyote or an angered snake, one has to react quickly.
One more reason why I like my dogs to hunt closer than some. I would take a bit of uncovered ground over a dog that has to brave the dangers alone.
Posted by Jay at 7:47 PM