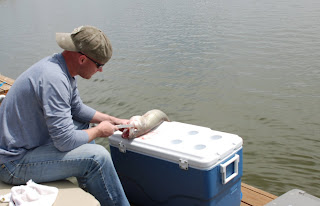 On a recent fishing weekend at Ft. Peck Reservoir, I was given an impromptu invitation to sit down with my neighbors at their trailer and eat a lakeside dinner. As the sun was setting above the water's glass-like surface, I was told the source of the main entree; it was a ten pound walleye caught the day before. I was even given a walleye "cheek", a scallop-sized morsel behind the eye of the large fish. It is rarity, given the fact that any fish under 4-5 pounds is too small to make the trimming of the cheek worthwhile.

I was immediately perplexed. Really? We are eating a trophy fish? A fish that I have always preached should either be released to spawn again next spring or sent to the taxidermist, so the behemoth could be celebrated for eternity? The walleye was battered and deep fried and tasted darn good, despite the pre-existing sour taste in my mouth. I kept my thoughts to myself. Who can argue with people nice enough to invite one to dinner?

I enjoyed my share of the bounty, along with a smattering of salads and other spectacular dishes. I thanked my gracious neighbors and went back to my chores and preparation for tomorrow's fishing.

It wasn't until the next day that I nearly walked back over to my neighbors to apologize-an apology for my narrow-minded thoughts and holier-than-thou beliefs that every big fish should be released. A fish that would be released back into a reservoir in which very little natural reproduction occurs. Sure, the fish could be caught again if released, but maybe it wouldn't have survived anyway.

This was my neighbor's first ten pound walleye in 40+ years of fishing. She had a right to keep that fish and enjoy it anyway she pleased. My neighbor chose to enjoy the walleye by hosting her neighbors for dinner. Sorry Marian. And thanks for the great dinner.
Posted by Jay at 8:54 PM