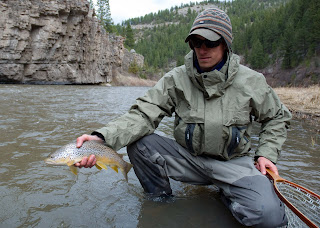 What doesn't kill you makes you stronger. Right? After a challenging Smith River trip, I'd like to believe that is the case. After a few days of indecisiveness leading up to the launch date, due to river conditions and a member of our party canceling, we decided to go ahead and float the Smith River anyway. I really had my heart set on spending my 30th birthday on the Smith and with a forecast calling for cool temperatures, we were hopeful that the river would be dropping and clearing throughout our trip.

On the morning of Tuesday, the 27th, we launched our canoe at Camp Baker with beautiful weather and pretty good river conditions (2' of visibility). Most folks do the Smith over 4 nights and 5 days, we opted to extend the trip by a night and a day to ensure that we'd have ample time to fish over the course of this 59 mile float.

The first day and a half of the trip went off without a hitch and we stopped frequently to wade fish the more productive looking water. The first flies out of my box were a JJ Special and a San Juan...I never had to deviate from that tandem setup. The fish were all over both flies on the drift, and a few took the JJ on the swing. Lots of heavy browns up to 17" and quite a few solid rainbows came to hand those first couple of days on the water. Best of all, the 70-80% chance of rain on Tuesday night and Wednesday didn't materialize...things were going great!

But then things took a turn for the worse late on Wednesday. Long story short, we dumped the canoe in a pushy cliffside sweeper that we approached much too casually. That debacle cost us dearly, we lost a paddle, a rod, an axe and 3/4s of our beer! Fortunately we were less than a mile from our boat camp and the clouds never opened up that night, giving us a chance to quickly build a warming fire and dry ourselves out. Hypothermia avoided, we settled into our respective tents for the night, looking forward to more fishing and paddling in the morning. 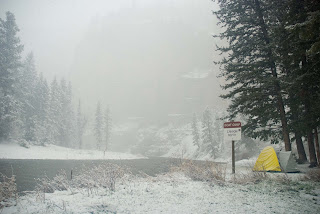 It wasn't to be, at dawn on Thursday morning I awoke to the sound of quiet, but persistent spattering on my tent walls...a light drizzle I assumed. As I peered out of the vestibule I was surprised to find a wintry scene with snow falling hard and accumulating quickly; this hadn't been in the forecast! By the time I'd finished my first cup of coffee the storm had intensified greatly, with heavy snow blowing in sideways on a fierce, sustained wind. This wasn't a day to be on the river in a canoe. We got a hot fire going and fed it steadily as the snow piled up in the canyon. We hunkered down and waited out the storm, spending three nights and two full days at the Canyon Depth boat camp as more than 2' of snow fell over a 36 hour period. 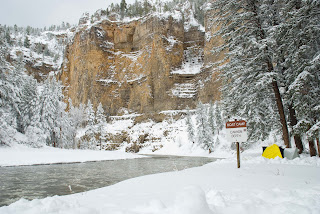 The storm broke late on Friday and we covered the final 40 miles or so of river in short order, putting in a 30 mile day on Saturday and a 10 miler on Sunday. We were pushing to get off the river and didn't fish much over the final two days and when we did it was unproductive. The trip was challenging and offered up the worst weather conditions I've ever experienced on an extended, self-supported backcountry trip of any nature. But we survived it, learned a few things along the way and gained some valuable experience. I like to think I'm stronger for it.
Posted by Will Jordan at 1:14 PM