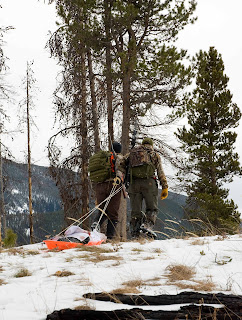 A cold turkey sandwich and lukewarm thermos coffee comprised my Thanksgiving day meal. The menu was meager compared to the gluttonous spread of Thanksgiving day delicacies that millions of American's were indulging in. Yet deep in the Lee Metcalf Wilderness with an unfilled elk license in my pocket, there was nowhere I'd rather have been.

As I was growing up and learning to hunt alongside my Dad, hunting on Thanksgiving became something of a tradition. It was, and still is, an extended weekend at the tail end of hunting season that provides a few days respite from the responsibilities of work and school.

Unfortunately my Dad couldn't be with me on this Thanksgiving day, but it was a particularly memorable holiday spent far from the comforts of sweet potatoes, pumpkin pie and college football. Throughout the day I was into elk, spotting a sizable herd at first light as they fed high above my location on a grassy, south facing slope. The herd slipped into dark timber long before I was able to cut the distance, but it was an encouraging sighting. By the time I set foot on the drainage divide where the herd had been, my GPS indicated that I'd climbed 2,000 vertical feet from the trailhead, over the course of about 2.5 miles. There was no way I was giving up that hard earned elevation so I spent the mid-day hours nearby, still hunting timbered slopes littered with elk sign. As the shadows lengthened, my attention turned to the transitional fringes of timber and the open, sage slopes where the herd had been feeding that morning.

Finally, at last light I spotted a small group of cow elk grazing just a hundred yards away, unaware of my presence. Using my pack as a rest I settled into a prone position and steadied the crosshairs. My 300 Weatherby roared and the Accubond found its mark. Working long into the night I took care of the meat, carrying out what I could in my NICE Crewcab and returning early the next morning with a sled and two friends whose willingness to put strong backs and legs to work was greatly appreciated.

I didn't harvest a mature bull elk as I'd hoped to this season, but in the end it doesn't really matter. I cleanly killed a public land elk and earned every pound of the meat that will fill my freezer, for that I give thanks.
Posted by Will Jordan at 12:47 PM