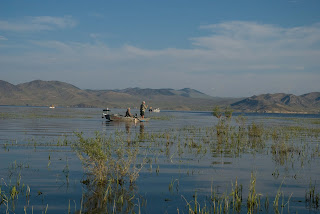 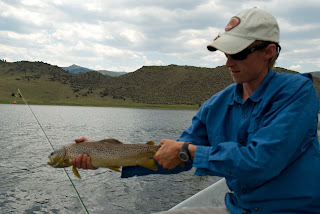 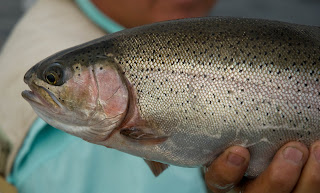 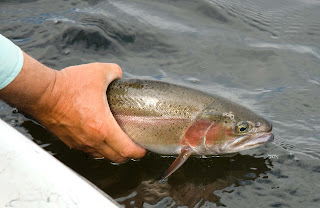 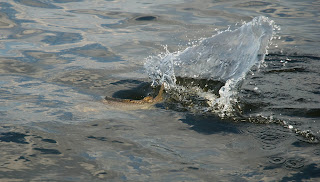 This was what I'd come for, I thought to myself as I released a 22" stud of a rainbow trout back into the calm, early morning water. My blissful thoughts were quickly interrupted by my fishing partner and guide for the day, Russ Kipp, who called my catch, "peanuts". I was insulted, that was one of the largest rainbows I'd ever tied into on a fly rod and I was beaming as I caressed that beauty. Of course Russ has fished and guided on this lake countless times and has seen countless more 22" trout pulled from its waters. I enjoyed the stories he told throughout the day, tales of truly monstrous rainbows and browns that prowl the reservoir known as Clark Canyon. Throughout the day those stories were interrupted by the ever so subtle dip of an indicator, followed by a bent rod and screaming reel. The chironomid sipping rainbows and browns typically ran 19" to 23", but that doesn't take into account the ones that got away. The hot rainbow that peeled out backing and never looked back, the BIG brown that smashed a bugger only to disappear into a jungle of submerged willows...those were the fish that Russ had come for and that I'll be back for.

The reservoirs of Montana are often overshadowed by the state's famous blue ribbon trout rivers. Russ has found that getting clients to fish Clark Canyon instead of the nearby Beaverhead or Big Hole is often a hard sell, the first time around. Once they get a taste of those big wild browns and hard fighting rainbows (quite a few of which are also wild fish) they're eager for more. There is definitely a local contingent of anglers that takes advantage of the reservoir's proximity to Dillon, but it's a big lake with plenty of room to spread out and explore the many productive inlets and channels.