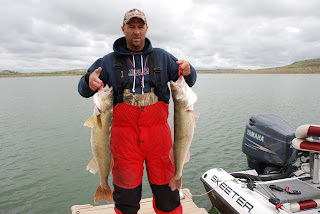 People questioned my sanity and probably my priorities, as I headed over to Fort Peck for the fourth weekend in a row. My only reply was that it was prime time on the sprawling reservoir for big walleyes-and it wouldn't last all summer.
The past few weeks on the water have been good, for both eating-sized 'eyes and trophy fish up to 31". Fortunately, we have seen fish in all sizes, which isn't always the case in this fishery. All of the fish over three pounds were released, except my fishing partner Mike Upgren, kept a pair of brutes that he wanted to mount together-probably fitting since they were caught just minutes apart.
While some fly fishermen wouldn't think of using bait (minnows, leeches, nightcrawlers) and some walleye anglers view fly fishermen as pretentious folks that all dress alike, I guess enjoy both pursuits equally. By mid-July, the walleye fishing on Peck will begin to slow and our rivers and creeks will begin to run clear, offering up some of the country's best trout fishing. For now, the walleye fishing is too good to pass up.
Posted by Jay at 7:18 PM