No Love For Lake Trout 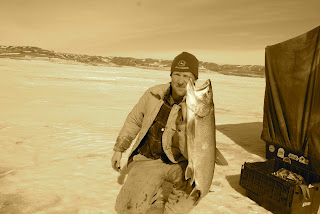 For some folks, lake trout are on a list of the most despised creatures, to some, only trailing wolves and Bernie Madoff. Lakers, Mackinaw, Macks-whatever the moniker - are labeled by a few as voracious , non-native bullies, that deserve to be treated as an invasive species. In Yellowstone Lake, where they were illegally introduced, they are being netted and poisoned as fast as possible to protect native cutthroat species. On Flathead Lake, fishing tournaments are held throughout the year, with the hope of culling a booming population of smallish lakers.
Lake trout are an aggressive fish. Aggressive sport fish on light to medium tackle, can provide wicked fun. And when those fish start reaching the 15 pound barrier, landing one through an 8" hole in the ice is harder than it sounds. A recent outing provided just that: fish from 10-15lbs that would just about rip the small rod out of your hand. Once hooked, they shook their heads like a marlin in mid-air.
Lake trout do have a place in some of our Montana reservoirs. And they don't belong in others, especially when introduced by a self-serving bucket biologist. But, for those that seek big, strong fish, lakers are one of Montana's best.