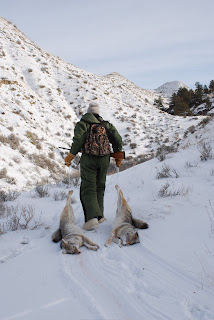 When I interviewed Don Laubach, a businessman and seasoned big game hunter from Gardiner, MT, I asked him what his dream hunt was. He matter-of-factly replied, "My next coyote hunt". And, I guess I see why.
Coyotes in Montana can be found nearly everywhere, from the brushy river bottoms to the rugged mountain ridges. They are active, always looking for their next meal. Often referred to as "surviviors", they are as sporting as hunting gets.
This past coyote hunt, we had better luck than one can usually expect hunting coyotes. Four different animals came into the wounded jackrabbit call and only one left, now an older and wiser creature. They used all of their senses coming into the calls, pausing at times to listen, positioning themselves downwind, and watching for any unusual movement. I have been told that if you can kill one out of four coyotes that respond to your calls, you have been fortunate. So, I know our luck will run out. When it does, another survivor will be created.
Posted by Jay at 6:07 PM