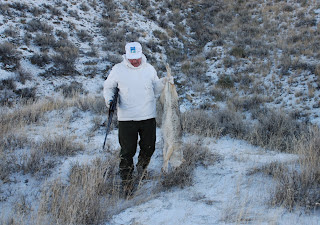 Dad and I had been talking about getting out for a day or two of coyote calling, but things just hadn't worked out. We were waiting for a fresh snow, not too much where the unmaintained roads would be blocked, but just enough to make the animals really stand out.
Finally, we had ideal conditions: an inch of powder, very little wind and a cold morning. By dawn, we were in the Missouri Breaks country; country that hasn't changed since Lewis and Clark worked their way upstream 200 years ago.
The coyotes were definitely in the area. We heard some howls every place we called. Dad killed one at about 75 yards with his .220 swift that sneaked in without me spotting it. The rest of the wary predators were safe; two even laid down some tracks from behind, walking in our bootprints, but were never seen. Great to be out in the wild prairie, even when we get out-smarted.
Posted by Jay at 5:08 PM