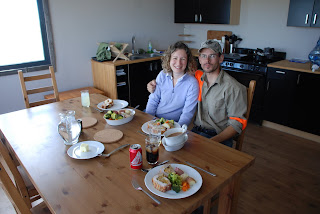 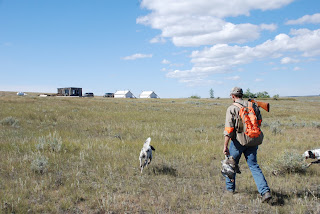 For most of us do-it-yourself hunters, we are quite accustomed to fixing our own meals afield, making shelter for a night or two of sleep and most importantly, finding a quality place to hunt. This weekend was a nice change for me.
I was the guest of Jacob and Sarah Dusek, proprietors of Sage Safaris, north of Havre, MT. I told them not to fuss for my visit, but upon arrival, I was shown my deluxe wall tent, with the wood stove already stoked, the lanterns already lit. I wish my elk camp was that comfortable.
The next day, Sarah had a superb breakfast ready at 8 o'clock, as we watched antelope bucks in rut, chase each other across the sage. We literally began hunting as we stepped away from the camp, Jacob directing me toward areas which often held Hungarian partridge and sharptail. The dogs' first point of the day nearly fooled me, as the Hun-sized birds were actually young pheasants. I quickly put my gun down and thanked Tess for doing her best anyway.
In the course of the morning, we did see sharptail and Huns, along with a bunch of pheasants, including some mature birds that had the audacity to squawk at us, seemingly knowing that they were safe until the October pheasant opener. My shooting was a little rusty, but good enough to make the day a success. The dogs did well, despite the day warming quite rapidly.
Being five miles from the Canadian border, the Duseks do see their share of winter. Jacob explained that they had a moderate winterkill in 2009-2010, with deep snow that lasted from December until March. Seeing as many birds as we did, was a pleasant surprise. Jacob has also done some upland improvement on his family farm, planting various food plots and limiting the grazing of certain vital winter habitats.
My mind was on lunch as we hunted our way back to the camp and as expected, Sarah's midday meal, didn't disappoint. Stuffed pork loin, fresh vegetables and some very tasty banoffe (google it), was as good as any big city restaurant. Being pampered isn't a bad thing. However, I did draw the line at Jacob's offer to clean my birds. Some things hunters must do themselves.

My only complaint of the entire trip was noisy neighbors. At about 3:00AM, I awoke to the loud discussion between three different groups of coyotes. One group was so close to camp, I had to yell at them to knock it off. Upon hearing a human scolding, they did stop their starlight serenades. I will take coyotes over big-city sirens and car horns, any day.
Thanks for the great time Sarah and Jacob.
Posted by Jay at 7:16 PM